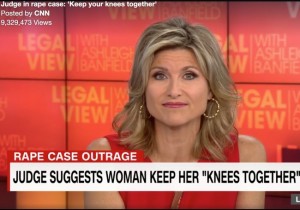 In this space, we have addressed what it is like for media reporter to live in a “cable news bubble.” We run the risk of getting way too “inside baseball” with people who don’t pay the same amount of attention. This writer has had a number of experiences with friends that have served as huge wake-up calls to the facts that news anchors are not gigantic celebrities to everyone and those who don’t work in the news industry rarely know the twists and turns of every single minor campaign story.

When Kate Bolduan started crying while discussing a sooty Syrian child who was pulled from the wreckage of what once was his home, it popped the cable news bubble. People who know nothing about the Syrian civil war, the refugee crisis, or the hourly rotation of cable anchors were sharing the clip.

The same thing has now happened with Ashleigh Banfield. All over Facebook, users who likely don’t tune into Legal View every day are sharing a clip. What is it that is uniting social media users regardless of their interest (or disinterest) in weedy legal issues? Here, watch:

She was reacting to a judge’s question to a young alleged rape victim. He asked why she didn’t keep her knees together or angle her body away from her alleged attacker while he penetrated her over a sink. As a result, Judge Robin Camp is now facing a judicial council meeting that will determine whether he can remain on the bench.

Banfield angrily moved on to read his advice to the young man who was accused of rape, who he ended up acquitting but who now faces a new trial because Judge Camp’s decision was appealed. The judge advised him to tell his friends they should be more gentle when having sex so they could protect themselves against being accused of rape.

Ultimately, his comment that “some sex and pain sometimes go together…that’s not necessarily a bad thing,” led Banfield to say that the top of her head “popped off” after reading that the first time. A judge musing on the place of pain in sexual encounters — let alone nonconsensual ones — isn’t exactly encouraged.

She finished her segment by noting that Judge Camp has apologized.

“That guy, you know, who was in his court who was acquitted is out there somewhere,” she said sarcastically. “But the judge apologized.”

Banfield has a history of letting her feelings be known when it comes to the way legal systems handle sexual assault and rape. She became emotional when reading the letter penned by the victim of Brock Turner last June.

Banfield had this to say when asked by Mediaite why she believes so many people have shared her clip:

I think people have had it with dinosaurs running the show. Anyone who thinks a rape victim is thrilled to be in courtroom….or in a hospital….or in a police station is tone deaf…or worse…deplorable. And for anyone to treat these crime victims otherwise is appalling. And that judge is young enough to have been part of the same culture that reared me. So, for the life of me I can’t fathom where he picked up his monstrous ideas. No excuses… Not age… Not infirmity… Nothing. The tipping point has come. We’ve had enough.

As the number of views and shares on the video continues to rise, it certainly looks to be the case that people have, in fact, had enough.