Assange: ‘Do Not See The Irony’ In Snowden Advocating For Transparency From Russia, China

Assange: ‘Do Not See The Irony’ In Snowden Advocating For Transparency From Russia, China 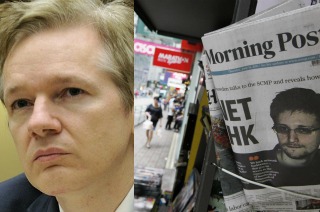 On Monday, Julian Assange, founder of the anti-secrecy organization Wikileaks, held a press conference for reporters via the Ecuadorian embassy in London. When asked whether he sees any irony in the fact that National Security Agency leaker Edward Snowden is seeking to advocate for government transparency from countries like Russia and China which have questionable records on privacy issues, Assange said that he did “not see” the irony.

RELATED: Fox Contributor: Snowden Not A Hero, He’s A ‘Coward,’ ‘Fugitive’ And ‘Traitor’

Asked by a BBC reporter whether he sees the irony in the fact that nations like Russia and China, which have an interest in sticking “one in the eye” of the United States, are aiding Snowden’s release of information regarding NSA practices, Assange replied that he did not.

“I simply do not see the irony,” Assange said. “Mr. Snowden has revealed info about mass, unlawful spying which has affected every single one of us.”

“The U.S. administration has issued a series of bellicose, unilateral threats against him and against others who are attempting to support his rights,” the Wikileaks founder continued. “That is a very serious situation and any country that has assisted in upholding his rights must be applauded for doing so.”

“We do not criticize people for seeking refugee status in the United States, despite its use of torture, drone strikes, secret bases, kill lists, and so on,” Assange concluded. He added that Ecuador, a nation where Snowden is presently seeking asylum, has not been accused of engaging in any of those practices.