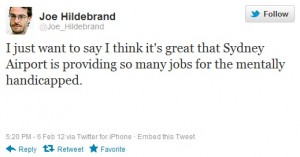 Joe Hildebrand, a columnist for Rupert Murdoch‘s News Corp. in Australia, has come under fire for a series of tweets that mock the mentally handicapped, the “retarded,” the Irish, and blondes. It all started with a tweet about airport personnel, but Joe Hildebrand’s reaction to criticism of his remark escalated into a full-on “politically incorrect” display of shamelessness that had one colleague calling him “a disgrace.”

Joe Hildebrand began by tweeting “I just want to say I think it’s great that Sydney Airport is providing so many jobs for the mentally handicapped.”

This prompted a reasoned, articulate rebuke from columnist Stella Young, herself a disabled Australian. Her column was noteworthy in that it eschewed shaming, or demands for firing, in favor of a simple plea for empathy: (the whole thing is more than worth a read)

Like the countless people who make thoughtless jokes about disability, I don’t think Joe Hildebrand was conscious of the ableism inherent in his silly joke. But it was there. And the thing with speaking from a position of privilege is that you’re not often asked to think about how your language affects other people – and when you are, it seems everyone jumps up and down complaining about how the system is oppressing their freedom of speech, with little thought for those whom the speech routinely oppresses.

Much like the homosexual community has to deal with people (okay, mostly teenagers – the rest of us have finally cottoned on that it’s more than a little bit homophobic) referring to things that are a bit shit as ‘so gay’ in our post-ironic society. I find it hard to imagine Hildebrand referring to the staff at Sydney Airport as ‘so gay’ – so why is it still okay for disability to be treated as synonymous with subpar performance?

Hildebrand’s tweet is offensive because it uses disability as a shortcut to mean “crap”. And in doing so, he reveals a subtle and no doubt unconscious contempt for disabled people that is still rife in our culture. At best, it displays a blatant ignorance of the very real barriers faced by people with disability, some of which, ironically, are employment and air travel. At its worst, it assumes that jokes like these are okay – because they’re not about anyone important. Perhaps it’s assumed that people with intellectual disabilities won’t ‘get it’ anyway. That they can’t be hurt by a joke they don’t understand.

Young’s message appeared to have gotten through, as Hildebrand retweeted a link that described the piece as “passionate and articulate.”

Yeah, not so much. Hildebrand followed up that tweet with these:

Just want to say how sorry I am for using the words “mentally handicapped” in a tweet. That was really retarded of me.

Just want to say I’m sorry for offending so many people by using the word “retarded” in a tweet. That was really Irish of me.

Sorry I just offended so many people by using the term “Irish”. Just having a blonde moment.

Then, just to be sure everyone knew he was specifically spitting on Young’s rebuttal, he retweeted this:

@mostlyFilth @Joe_Hildebrand your series of faux pas today has been pretty gay.

If Hildebrand is anything like Rush Limbaugh, the courage he displays in the face of the mentally disabled, the wheelchair-bound, the Irish, and the gay ought to stand him in good stead with his audience.

This brand of “defiance” crops up quite a bit here, but the thing that people like Hildebrand or Rush Limbaugh fail to realize is that what they call “language policing” is really just an attempt to let people know when they’re being assholes, and affording them the opportunity to stop.