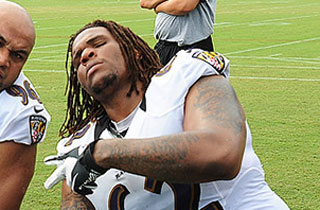 On Monday, a recently-released NFL player was indicted on multiple charges of animal abuse, including abuse towards a dog… and an alligator.

Terence Cody, a Ravens nose tackle drafted in 2010 and released Monday, was indicted in a Maryland court on 15 counts on Monday, including 13 counts of animal cruelty and two drug-related counts. Of the 13 counts of animal cruelty, seven of them were related to the dog, an $8,000 bull mastiff from Spain, and six were related to the alligator, which Cody illegally owned.

According to ESPN, the investigation against Cody was launched after he took his dog to a veterinarian and it died, prompting an inquiry into its death. (Prosecutors say that the charges are not related to dogfighting, which, whew, we guess.) The charges break down like this:

• Two counts of aggravated animal cruelty involving a dog described as a Presa Canario Mastiff. Those are both felonies and carry a maximum incarceration of three years.

• One count of illegal possession of an alligator.

• Five counts of animal abuse or neglect involving the alligator.

• One count of possession with intent to use drug paraphernalia.

• One count of possession of marijuana.