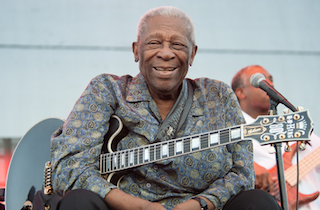 Blues legend BB King passed away last week at the age of 89 shortly after entering hospice care. But his daughters believe it was poison.

The daughters have been criticizing King’s care for months, alleging Toney had blocked family members from visiting him and that money had been disappearing from his accounts. The daughters unsuccessfully sued to take over guardianship of King, alleging neglect.

“They’ve been making allegations all along,” replied Toney, who had power of attorney for King. “What’s new?”

No investigation was initially conducted into the death, but authorities are have now opened up a homicide investigation. A coroner’s exam was conducted over the weekend, but toxicology reports won’t be available for two months:

FWIW, an attorney for King’s estate called the allegations “unfounded,” adding they were “extremely disrespectful of B.B. King,” while the coroner found “no evidence to substantiate the allegations.”