Beat the Press: Why Trump’s All-Out Attack on an Unpopular Political Press is Working
Opinion

Beat the Press: Why Trump’s All-Out Attack on an Unpopular Political Press is Working 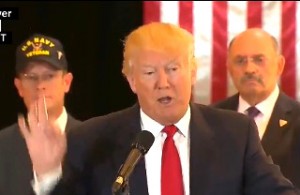 In making his announcement around millions raised for veterans groups, Donald Trump picked the wrong time to spike the football.

Tuesday’s press conference – bombastic and eye-popping to almost anyone watching, even for a Trump event — saw ABC’s Tom Llamas called “sleaze” and CNN’s Jim Acosta referred to as “a real beauty.” Appearance was not the context for the latter. Either way, Trump found a way to be altruistic… to himself. And the bigger takeaway was his continued strategy to both exploit the media (via free advertising with an ROI we’ve never seen in politics) while insulting its members at the same time.

As the end of the press conference, The Daily Mail’s David Martosko asked if press briefings were going to be this contentious if Trump became president.

“Yeah, it is gonna be like this, David,” Trump said. If reporters continued to print “probably libelous stories,” he said, “I’m gonna continue to attack the press. Look, I find the press to be extremely dishonest. I find the political press to be unbelievably dishonest.”

The press, of course, is livid Trump was so mean to some of its members on Tuesday. And for the rest of the day, the presumptive GOP nominee’s temperament, professionalism, intelligence, honesty… you name it… was called into question (again) in segment after segment on cable news. But here’s the problem: The argument against Trump is coming from an institution that is loathed as much as the politicians it covers right now.

Remember, Trump isn’t really a Republican. He’s not a Democrat and not a Libertarian. He’s a populist. And the populace feels the press is exactly as Trump described: Not just dishonest. But unbelievably dishonest. Per an Associated Press story in April:

Just 6 percent of people say they have a lot of confidence in the media, putting the news industry about equal to Congress and well below the public’s view of other institutions. In this presidential campaign year, Democrats were more likely to trust the news media than Republicans or independents.

So when Trump attacks the media as vociferously as he did on Tuesday at Trump Tower, those who work in the industry see it as another poor spectacle that will hurt his poll numbers that now show him in a dead heat (RCP average) with the press-conference-challenged Hillary Clinton. But we’ve seen this movie before: Media swings at Trump — this time on the veteran donations — but the candidate proves to be the 21st Century version of Barry Sanders.

Random 90s sports analogy explanation: Sanders — arguably a Top-5 running back all-time — was particularly known for being quick, elusive and frustrating to catch despite being on mostly mediocre teams that could key on him. This 1994 New York Times piece on Barry sums up the point nicely. Anyway, that’s Trump. He’s Teflon Don(ald). It may not have been seamless or pretty, but that money did (eventually) get to veterans groups. He does get vindicated here. And instead of being defensive about how long it took for the process to be completed (four months), he avoided another haymaker and landed some crisp rabbit punches of his own in the process.

It’s really no different than President Obama’s election strategy in 2012 to go after a Republican-led Congress. As the AP points out, the media and Congress are scoffed at by basically everybody compared to other entities like doctors and military personnel. Media members — particularly political media who are mostly either in the #NeverTrump crowd or #I’mWithHer (Hillary) corner — are aghast for being directly insulted, and so personally. But guess what? When you’re polling at six percent and example after example of either shoddy reporting and/or outright bias is exposed week after week, any sensible PR person — and Trump is that even when not impersonating someone else — knows when and how to take advantage.

You also need brass in these situations as well. It takes a certain kind of fearlessness to stand up at a podium and go on the attack against a horde of professionals with major megaphones at their disposal in the way he did yesterday. For some in conservative media, this was a long time coming after major (and mild-mannered) Republican figures like Bush 43, McCain and Romney were seemingly constantly on the defensive:

“That was the kind of press conference Republicans voters have been dying to see for who knows how many years,” Rush Limbaugh said on his radio show Tuesday. “Say what you will about Donald Trump — how many years have people been begging for a Republican to just once take on the media the way Trump did?”

Now… how this resonates with independents — who will decide this election in states like Florida, North Carolina, Virginia, Pennsylvania, Ohio — remains to be seen. But the trend for Trump in the polls appears to show this strategy is working. And even when Hillary does seek airtime, listen closely to who and what the questions are about: Trump, Bernie, more Trump, and email investigation/FBI, which may explain why her numbers are stuck or slipping right now. It’s not that she isn’t getting out there, it’s that every interview is about the competition, an investigation and invariably both.

Ask even a Clinton supporter to define her platform in less than 15 seconds, elevator-pitch style… it’s next to impossible. If Hillary wants to turn things around, a simple message needs to be conjured up and driven home in the way Joe Biden so effectively did on the trail in 2012 with this line repeated over and over:

“Bin Laden is dead and General Motors is Alive.”

Soundbitey. Easy to understand. And it resonated. Trump has that with one-liners about walls, making America Great again, improving on bad trade deals with Chy-NA, with Mexico, and yes… both your establishment media and establishment politicians are morally bankrupt. To get out from under Trump’s shadow, Clinton needs to simplify the message and create contrast in the process.

Another day, another round of news cycles dominated by Donald Trump.

And if you think attacking the media the way he did on Tuesday is a bad thing, 94 percent of the American public may very well disagree.