Beck Responds to Palin Deriding Him and Cruz for Border Trip: You Live in ‘Fantasy World’

Beck Responds to Palin Deriding Him and Cruz for Border Trip: You Live in ‘Fantasy World’ 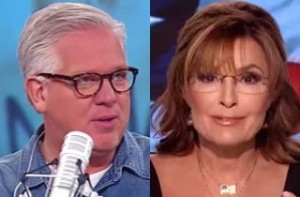 This past Friday, Sarah Palin spoke at a Republican dinner and, at one point, derisively referred to illegal immigrants being enticed with “gift baskets.”

She was referring to a humanitarian mission that Glenn Beck organized three years ago to bring supplies to children at the border. Ted Cruz accompanied him and they handed things out like soccer balls and teddy bears. They wanted to send the message about how children of illegal immigrants were victims of the crisis that the Obama administration wasn’t adequately addressing.

Beck responded on Facebook yesterday saying, “Yes SARAH, we did recognize the human plight of those on our border. If we only demonize those we disagree with, we cease to see others as humans.”

He repeatedly brought up that while he, Cruz, and others were pushing for tougher action on immigration, Donald Trump––whom Palin fully supports––was AWOL, and even professing a more liberal immigration stance.

If you really think the American people believe that Mike Lee, Louie Gohmert and Ted Cruz are open border people and only began to talk about the border because of Donald Trump —

—you just might be unhinged enough to believe the silent response, the checking of email and rolling of eyes during your speech in Wisconsin was belief in the fantasy world of Donald Trump you now inhabit.

He concluded with a call to end “the celebrity progressive illusions” in both parties.

Sarah Palin was right!"Actions speak louder than words".While United States Senator Mike Lee, Ted Cruz and I were on…