Ben Carson Plays The Race Card: Media Wouldn’t Be ‘Concerned’ if He Was White Conservative 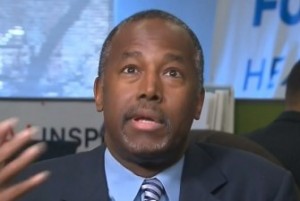 Hey, everybody, remember Dr, Ben Carson? He’s the guy who was the Republican presidential frontrunner for a hot minute, until his many decades of saying crazy stuff finally caught up to him. Or maybe, For Whatever Reason™,  his supporters just up and decided to go for someone who was different somehow from Carson, like Donald Trump. We may never know.

Anyway, Carson is pretty sure that the media’s treatment of him is all about his race, and they wouldn’t have scrutinized him so carefully were he a white conservative. Carson made that claim as a guest on the Armstrong Williams show (how’d he manage that exclusive?):

“Many people in the media have predetermined that if you’re black and you’re a conservative, that you’re bad. That’s just their narrative.”

“I think it does have some role, absolutely. If I were a white conservative they wouldn’t be concerned.”

To most of us, this sounds like a fairly obvious point, but to the conservatives whose support Carson is trying to hold onto an/or regain, it’s “playing the race card.” Some might observe that it was Carson’s status as a black success story and outspoken black critic of the first black president that brought him success among conservatives in the first place, and that if he were a white conservative behaving the same way, he’d be just another douchebag trying to get Erick Erickson’s autograph at CPAC.

My observation, though, would be that the extent to which Carson’s race matters with regard to scrutiny he received from the media, doesn’t the result of that scrutiny reflect something about the support that he once enjoyed, and no longer does? He’s obviously right, race played a factor in how intensely the media looked into him, so how much did it factor into conservatives’ quickness to abandon him? We may never know.