Bernie Bombs in NYDN Editorial Meeting, Reveals Just How Substance-Free His Campaign Is 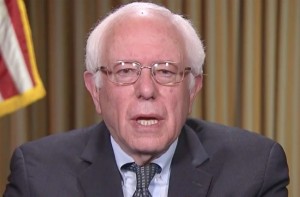 For all the attention that Donald Trump has gotten for his policy-free trainwreck of an editorial meeting with The Washington Post and later The New York Times, not much attention has been given to the fact that Democratic presidential candidate Bernie Sanders gave an equally disastrous interview to the editorial board of the New York Daily News.

NYDN released its transcript of the editorial meeting late last night, and boy is it a doozy. The worst parts are below, but those with the time to spare should really read the whole thing. Suffice it say, it was more or less an hour-long exercise in the editors asking serious and well thought-out questions about policy, and Sanders revealing that he was in way, way over his head.

Right off the bat, when it came to the central message of Sanders’ campaign– that Wall Street should be prosecuted for their role in the 2008 financial collapse– he couldn’t even say what laws they were supposed to have broken, saying he only “suspected” and “believed” they broke the law.

Daily News: …Do you have a sense that there is a particular statute or statutes that a prosecutor could have or should have invoked to bring indictments?

Sanders: I suspect that there are. Yes.

Daily News: You believe that? But do you know?

Sanders: I believe that that is the case. Do I have them in front of me, now, legal statutes? No, I don’t. But if I would…yeah, that’s what I believe, yes.

Daily News: What kind of fraudulent activity are you referring to when you say that?

Subprime mortgages were (and still are) legal. It’s possible industry practices towards subprime mortgages in the lead-up to the financial crisis were illegal, but if so Sanders clearly can’t articulate why.

When it comes to his campaign promise to break up the large financial institutions, Sanders clearly has given little thought to how he would actually carry it out. In the span of a few questions, Sanders told the Daily News he will pass a law to do it, then claimed the administration already has the power to do so under Dodd-Frank, and then claimed the Federal Reserve has the power to do so by fiat.

Likewise, Sanders has evidently given little thought to what impact his policy would actually have on the large institutions he wants to break up:

Daily News: So if you look forward, a year, maybe two years, right now you have…JPMorgan has 241,000 employees. About 20,000 of them in New York. $192 billion in net assets. What happens? What do you foresee? What is JPMorgan in year two of…

Sanders: What I foresee is a stronger national economy. And, in fact, a stronger economy in New York State, as well. What I foresee is a financial system which actually makes affordable loans to small and medium-size businesses. Does not live as an island onto themselves concerned about their own profits. And, in fact, creating incredibly complicated financial tools, which have led us into the worst economic recession in the modern history of the United States.

Daily News: I get that point. I’m just looking at the method because, actions have reactions, right? There are pluses and minuses. So, if you push here, you may get an unintended consequence that you don’t understand. So, what I’m asking is, how can we understand? If you look at JPMorgan just as an example, or you can do Citibank, or Bank of America. What would it be? What would that institution be? Would there be a consumer bank? Where would the investing go?

Daily News: No. But you’d be breaking it up.

Sanders: That’s right. And that is their decision as to what they want to do and how they want to reconfigure themselves. That’s not my decision.

Now I suspect that some Bernie fans would appreciate his somewhat dismissive attitude towards what will happen to giant financial institutions once he intervenes and breaks them down. But if the financial crisis proved one thing it’s that the health of the world economy is often tied to the health of these institutions. If Sanders can’t even predict what’s going to happen to JPMorgan after you break up JPMogran, how can he predict its effect on the global economy and everyday Americans?

NYDN then brought up a recent court case in which a federal judge rebuked the federal government’s ability to designate MetLife a “systematically important” company in need of greater oversight, asking what the implications for Sanders’ policies were. “It’s something I have not studied, honestly, the legal implications of that,” Sanders responded.

That’s not some minor and obscure issue, by the way. Just last week, The New York Times editorial board declared the ruling a threat to Dodd-Frank itself.

It bears repeating that these aren’t questions about foreign policy or social justice issues, generally considered Sanders’ weaknesses. This is just on financial policy, the entire underpinning of Sanders campaign. And on question after question, Sanders whiffed.

On foreign policy, we again see the pattern of Sanders speaking broadly about the issues that need to be fixed, but offering zero concrete answers on how to do so. On Israel, for example, Sanders condemned the building of settlements but couldn’t say how far or how much Israel should pull back. “You’re asking me a very fair question, and if I had some paper in front of me, I would give you a better answer,” he said frankly.

Even while continuing to condemn the settlements, Sanders basically telegraphed that he would do nothing as president to end them. “Israel will make their own decisions. They are a government, an independent nation,” he said.

When pressed about his belief that Israel shouldn’t face charges of war crimes, Sanders couldn’t even explain his own stance.

Daily News: Do you support the Palestinian leadership’s attempt to use the International Criminal Court to litigate some of these issues to establish that, in their view, Israel had committed essentially war crimes?

Daily News: Why not?

Daily News: Why not, why it…

Sanders: Look, why don’t I support a million things in the world? I’m just telling you that I happen to believe…anybody help me out here, because I don’t remember the figures, but my recollection is over 10,000 innocent people were killed in Gaza. Does that sound right?

Whether you agree with Sanders position here or elsewhere it besides the point. I would expect a presidential candidate to be able to explain pretty clearly why he doesn’t support a U.S. ally being brought before an international court to answer charges they committed war crimes, especially if that candidate was a former resident. (And that last part of Sanders’ response makes no sense. Who defends Israel by listing off the number of people they killed?)

To say nothing of all the times Sanders simply dodged a question. For example, he gave a lengthy three-hundred word response to a question about the Obama administration’s drone policy that didn’t even mention drones. He did however bring up the fact that Hillary Clinton voted for the Iraq War while he didn’t.

The editorial board tried again: “President Obama has taken the authority for drone attacks away from the CIA and given it to the U.S. military. Some say that that has caused difficulties in zeroing in on terrorists, their ISIS leaders. Do you believe that he’s got the right policy there?”

Sanders’ response: “I don’t know the answer to that.”

On social policy, Sanders did somewhat better. He did hit a snag when asked about his promise following the Oregon shooting to release a comprehensive gun control agenda, an agenda he’s yet to release. “What the agenda is is very similar to where to where President Obama is…” Sanders said. “So I support pretty much the President’s agenda.”

But Sanders got called out when he listed four principles of his new gun control agenda. “Just to be clear, the press release your campaign put out the day of that announcement of the forthcoming comprehensive plan, you made that announcement, those were the four points you made then,” an editor pointed out. “Have you moved any further beyond that?”

“Well, I don’t know that anyone has moved…I think that’s the President’s vision, that’s my position,” Sanders replied.

All in all, a simply pitiful performance from Sanders. It’s hard to read the entire thing and not agree with former Obama advisor Dan Pfeiffer‘s take: “The transcript of Sanders’ meeting with the Daily News Ed Board is almost as damning as Trump’s with the WaPo.” But at least Trump was in hostile territory; Sanders was talking to a liberal tabloid.

It’s possible Bernie just had an off-day, that he actually knows all the answers to those very basic questions he was asked. But it seems much more likely that the reason he couldn’t answer those questions were because he lacks the seriousness and savvy one expects from a presidential candidate. I’m sure if you asked Sanders himself what went wrong, he’d give the same answer he gave for an hour straight: I don’t know.