Big Hollywood Wants To Know: When Will The Institutional Left Stop Trying To Censor Lady Gaga? 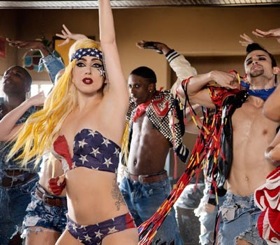 Big Hollywood is usually not the go-to site on the web for the latest Lady Gaga news, but this morning readers woke up to an in-depth book review of the Gaga biography Behind the Fame denouncing the “‘liberal’ political prudery” of critics concerned with the violent, sexual content of her latest video for “Telephone.” Wait, “liberal?”

Turns out, contributor, and author of the review, Daniel Kaider really doesn’t care about Lady Gaga. In fact, he cares so little about Lady Gaga that he couldn’t put her biography down, and later felt compelled to write a post about how apathetic he is towards the whole thing. Then he criticized those who cared about Lady Gaga, accusing them of typical leftist social conservatism pervasive in left-wing bastions like the Huffington Post, or something like that:

“Just as I was finishing it meanwhile the video for Telephone exploded everywhere. A hysterical blog in the HuffPo accused Lady Gaga of all manner of filth and depravity, asking what was next- a snuff film? Reading the piece I realized it was a dreary recital of ‘liberal’ political prudery – very similar to other strands of prudery only dressed up in 60s/70s era political jargon about sexism, feminism etc. So I watched the video, and noted that it was made by a tiresome prankster from Sweden- Jonas Akerlund… I’d at least commend him for getting up the noses of the sanctimonious left if his bag of tricks wasn’t so predictable”

Big Hollywood has already recruited legendary anti-Hollywood German filmmaker Werner Herzog to the anti-leftist cause, a prime choice, and certainly better-fitted to Big Hollywood‘s fight against socialism than a hyper-sexualized gender-defying pop star. Herzog is a stoic, highly-pretentious Bavarian genius who makes movies about bears eating people alive and failed midget revolutions— he’s a shoo-in for this sort of political manipulation. But Gaga? Her defining political identity is that of a gay rights activist, so much so that she merits her own personal protest from the Westboro Baptist Church. Her raison d’etre is to defy gender and sexuality norms in the name of higher art, not exactly the cornerstone of conservative philosophy.

Beyond the confusing theory behind this claim is also the logic: if it’s the “sanctimonious left” who has been beating the war drums against Gaga for her wantonness, how does Kaider explain calls on Fox News to have the video banned? He doesn’t, of course, but the undercurrent in the piece against arbitrary, Palinesque social conservatism– even if he defines it as a liberal trait– is not the first sign that the Big authors aren’t using the left/right spectrum to explain their politics– they’re using the libertarian/authoritarian scale. It’s the only way “our side” would be pro-Gaga and the “liberals” would be pro-censorship; the right would always be pro-freedom and the left pro-regulation, and it’s much more consistent than trying to explain why freedom of expression is vital in some circumstances and dangerous in others. If Republicans and, more broadly, conservatives are trying to build consistency and make the Constitution the backbone of their cause, Lady Gaga’s flagrant abuse of First Amendment rights may make her the perfect ally.