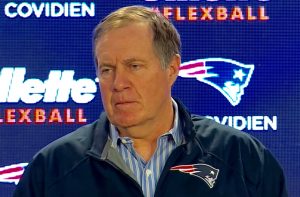 Bill Belichick has not exactly been enamored with the Microsoft Surface. Earlier in the season, the New England Patriots coach angrily smashed his tablet on the sideline after having issues with it during a game.

Now, the coach has had enough of the device. During a teleconference Wednesday, the coach went on a lengthy rant airing his grievances with the tablet. Sadly, no audio is available yet from the call. But the transcript, via NESN reporter Zack Cox, is wonderful in its own right:

Here’s Belichick’s full answer as to why he hates the tablets. Lasted five minutes and 25 seconds. pic.twitter.com/wcSqebtQRu

It was a problem last week. It’s basically a problem every week. The degrees aren’t always the same but we’re usually dealing with something. But as far as the tablet goes, I mean there was an experiment in a couple of the preseason games. It was one preseason game. We actually had two because it was our home game and Carolina’s home game where we had video on the tablets. But for me personally, it’s a personal decision, I’m done with the tablets. I’ll use the paper pictures from here on because I’ve given it my best shot. I’ve tried to work through the process but it just doesn’t work for me and that’s because there’s no consistency to it.

The coach added, with apparent seriousness, “I just can’t take it anymore.”