Bill Cosby: ‘You Can’t Prove’ That George Zimmerman Is ‘Racist’ 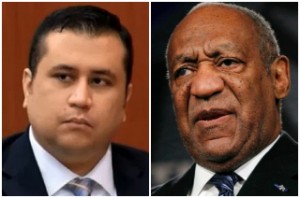 Bill Cosby spoke out for the first time this week about the George Zimmerman murder trial verdict, echoing statements he made on CNN about the case early last year. The actor and comedian told Virginia radio hosts Domenick Nati and Nate Foutz that the trial and media coverage demonstrated that “you can’t prove if somebody is a racist.”

Cosby said he “found that the prosecution did not tell the story well” during the trial, “and they lost.” But that doesn’t mean he thinks they should have injected a racial element into their case. When the hosts asked if he thought Zimmerman “racially profiled” Trayvon Martin, Cosby responded, “See this racial stuff goes into a whole bunch of discussion which has stuff that you can’t prove. You can’t prove if somebody is a racist unless they really come out and do the act and is found to be that.”

As he told Candy Crowley last April, Cosby sees guns the real issue in the case. “I know that if you have a gun,” he said, “it changes your whole feeling about what you can tell people, about how people better do what you say.”

“Let’s not go into a racial discussion unless we really have something there,” he continued. “But we do know that he had a gun. And we do know that the Florida state law says you have a right to defend yourself, that means both people.” Describing the scenario of the case, in which someone with a gun “has a right to defend himself” against someone who’s unarmed, Cosby said the laws are “getting out of line.”

Cosby’s comments also echo those made by another prominent African-American celebrity, former NBA star Charles Barkley, who yesterday said he “agrees” with the Zimmerman verdict and did not see race as the single motivating factor in Martin’s death.

Listen to audio below, via DomNnateRadio: