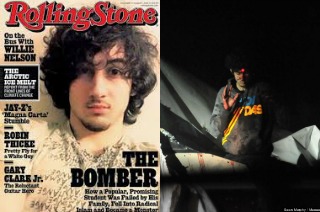 A year of violence. A movie theater in Aurora, Colorado. A shopping mall in Portland, Oregon. An elementary school in Newtown, Connecticut. A street packed with revelers in Boston, Massachusetts.

These brutalities inspired successive waves of commentary assigning blame to every manner of cause; mental illness, violent video games, guns, godlessness. A few experts and analysts, none of whom consider themselves members of the media elite, warned that the disturbed young men who committed the above atrocities sought relevance beyond their station. Concerned with the prospect that copycat attackers may be inspired by how those attacks justifiably dominated the news cycle, some experts warned the media to avoid making a martyr of future killers and instead focus on their victims.

This meritorious advice is qualified, apparently, by the level of esteem with which journalists hold a particular source that opts to forgo the greater good in favor of increasing circulation. It is clear that members of the professional news media greatly admire the journalism performed by the capable reporters at Rolling Stone magazine. The Fourth Estate’s high regard for that magazine’s dedication to long-form, investigative journalism has served to justify extraordinary twists of logic and fatuousness in order to justify that magazine’s sensational cover featuring the mass-murdering Boston Marathon bomber.

“Maybe the hysteria about Rolling Stone’s August issue is heat-wave induced,” a typically condescending New York Times Friday editorial begins. “That’s the only charitable explanation for the stampede of critics who have been accusing Rolling Stone editors of trying to turn Dzhokhar Tsarnaev, the man accused of the Boston Marathon bombing, into a rock star merely by putting him on the issue’s cover. (Never mind the word “monster” right there in big type.)”

The Times absolves Rolling Stone of irresponsibility in two ways: first, that the soft-focus image of the attractive teenage Tsarnaev (whose physical features have captured the affections of a number equally deranged teenage girls) was featured on the front page of the Times itself. It is surprising that the terminally solipsistic New York Times did not stop there, presuming that this justification was all that was required to prove the correctness of Rolling Stone’s course. One could practically hear the heavy sighs of the editorial writers as they shouldered their obligation to continue.

The Times editorial board observed that TIME Magazine has featured killers on their covers over the decades as well, including Adolph Hitler and Osama bin Laden. Even Rolling Stone itself has featured Charles Manson on its cover – though the fear that a copycat would devote his life to brainwashing a number of impressionable young women to commit murders in his name is less compelling than the concern that a disaffected teenager might chose to fill a pressure cooker with low explosives and metal fragments.

Finally, the Times notes that the article in question – an 11-page, thoroughly detailed examination of the circumstances which led a relatively naturalized American teen to embrace jihad and commit an act of terror – is a fascinating read and is sufficiently exculpatory for whatever provocation the magazine’s cover represents. If the impressionable teen compelled by derangement to commit mass murder fails to read the article, well, that’s on them.

Here’s hoping a depraved young man with homicidal thoughts is a fan of long-form journalism and doesn’t gravitate towards Rolling Stone exclusively for its regular titillating photo spreads and interviews with music industry icons.

The Times is partially correct – the article by Janet Reitman is great journalism. But absolution for the pop culture magazine’s elevation of a terrorist to rock star status is a long way off.

Young, white, male. 49 percent of Rolling Stone’s readership is under the age of 34. 60 percent of their readers are men and 75 percent are white. This demographic profile is also the group most likely to commit acts of mass violence. This is the group most prone to radicalization.

And does the media play a role in providing for untethered young white men examples of how they may achieve a stature in death they perceive to be unattainable in life? Ask psychological experts, and they will say yes.

“The mass shooters,” said clinical and forensic psychologist Dr. Daniela Schreier in the days that followed the Newtown massacre, “are constantly in the news.”

“In young people who might be already disturbed, they look at it and say, ‘wow, this is a young man who, kind of, did it. He took himself out and he made a legend out of himself.’” She continued, identifying strains of copycat behavior in the mass shootings that dominated the news in 2012.

“When crimes that receive a lot of attention form clusters of this sort, it suggests that the desire for media attention, and notoriety is a strong motivating factor,” wrote evolutionary psychologist Dr. Nigel Barber in Psychology Today in the wake of the Aurora shootings. “Generally speaking, journalists and social media writers are unwilling to accept that sensational coverage of mass shootings makes these crimes more common.”

In February, Dr. Alex Mesoudi, a professor of anthropology at Britain’s Durham University, summarized the findings of a recent study in the International Human Press which conclusively links mass media coverage to suicidal behavior and suggests, though the rareness of mass violence prevents a conclusive finding, that the media’s sensational coverage of the executors of mass violence makes those events more likely.

The Times snide dismissal of anyone who has expressed concern over Rolling Stone’s cover is indicative of a culture in the news media that has made a virtue of its insularity. Their reflexive defense of the cover, accusing the pop magazine’s critics of conflating the cover art with the substantive lead article, is disingenuous. The impulse to malign Rolling Stone’s critics is also a feature of the wagon-circling that so often occurs when members of the journalistic tribe come under justified criticism.

What is certain is that the Times editorial board will not read this post. If they do, it is unlikely they will internalize the criticisms contained within. And when the next incident of mass violence is committed by the usual suspects, the Times editorial board can go about recycling tired arguments about Americans’ access to guns and retreat to the newsroom where they will be lauded by their colleagues for their depth of insight.