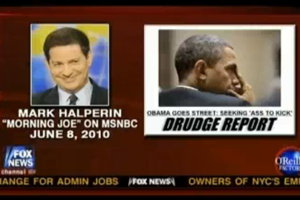 Bill O’Reilly found it fairly strange that, after clamoring for the President to show anger, many in the media then found it distasteful for him to turn around and express his frustration while trying to find “whose ass to kick” over the BP oil disaster. Of particular note was Drudge Report proprietor Matt Drudge‘s headline: “Obama Goes Street,” which O’Reilly saw as “nifty” and “kind of with it” but was amazed that anyone would see a hint of racial commentary in it.

The Drudge discussion began early this morning, when Time senior political analyst and Game Change author Mark Halperin criticized Drudge for racializing Obama’s comments on Morning Joe. O’Reilly seemed not to see where Drudge could have injected racial sentiment in that headline, although he acknowledged that the “going street” slang was used in “African-American precincts.” “The only thing black” about this story, O’Reilly asserted, “is the oil in the Gulf.”

Halperin replied that African-Americans, especially males, expressing anger publicly does not go well with white voters: “He can show a range of emotion. One of them, though, is not anger, unless he wants to deal with the political repercussions of that.” He also accused Drudge of knowing “exactly what he was doing with that headline”– not that he is a racist, but “Matt Drudge knows how to tap into the sentiments of a lot of his readers.” To which O’Reilly earnestly asked: “You think Matt Drudge wrote a headline, not because it was cool or in, but because Matt Drudge wanted to provoke a racial stereotype?” Short answer from Halperin: Yes, but “it plays on multiple levels.”

Towards the end, O’Reilly warned Halperin that “Drudge is going to hear this tonight.” Rather than being intimidated, which seemed to be O’Reilly’s intention, Halperin made a prediction: “this clip is going to end up [on the Drudge Report] and Matt will be flattered.” And he’s probably right.