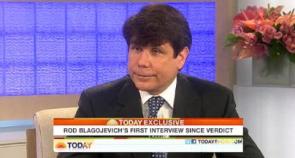 Former Gov. Rod Blagojevich said on the first leg of his media tour that he may do another reality TV show if the opportunity presents itself.

But isn’t this all reality TV at this point? Today Blago sat down with Meredith Vieira of the Today show, who didn’t hold back on firing hard-hitting questions (that Blago deflected).

The first post-verdict interview began like this: “As of today you’re out of a job, your political future looks like it is dead, and you are now a convicted felon. Do you take any responsibility with what’s become of you?”

Basically the answer from Blagojevich was no – but it came in the form of a fantastic answer to an unasked question. Later, he would only admit that he regretted “certain people I put faith in and trust in, advisers and different people.”

He wasn’t willing to commit to take the stand if there is a retrial, although he said, “I would be fully prepared to take it the second time around if there is one.” Also, his harshest words were for the prosecution:

The very thing they’re charging me with they ought to charge themselves with and they ought to add an additional count of hypocrisy.

That’s right – he wants to charge the prosecution with hypocrisy.

Vieira pressed him on the fact his own lawyers called him a “dim bulb” several times during the trial. Blago’s response? Laugh, pause, change subject. By the way, the content of the f-bomb-laden tapes is now being referred to by Blago as “brainstorming.”