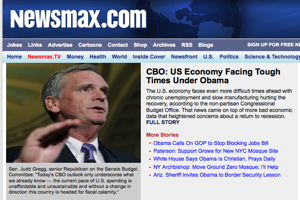 Yesterday, the conservative website Newsmax got caught producing an advertisement for a suspicious financial newsletter and using Bill O’Reilly (unbeknownst to Bill O’Reilly) to sell it. Fox News responded saying they had no idea that the “speaking engagement” was going to be used for profit and that they had no “financial stake” in the matter. Now Newsmax has responded that both parties agreed about the newsletter, but not about O’Reilly’s appearance.

In an extended article after their original post, the New York Times published new information on the interview/advertisement and how it came about. Apparently, O’Reilly’s agent in charge of booking speaking engagements negotiated with Newsmax, and while there was an awareness that a newsletter was to be mentioned, there was, according to O’Reilly’s camp, absolutely no understanding that O’Reilly was to sell anything. Meanwhile, a Newsmax representative told the Times that there was an agreement that newsletters could be “offered” during the interview, but, adds the Times, this was not in relation to O’Reilly:

The appearance was set up by Don Walker, an agent with Harry Walker who books Mr. O’Reilly’s speaking engagements. Mr. Walker said in an e-mail that “we understood Newsmax would mention a financial newsletter service during the program, which was explicitly separate from Bill’s appearance.”

Similarly, Newsmax said Thursday that “both parties agreed that Newsmax could offer financial newsletters during our broadcast,” separate from Mr. O’Reilly. The Web site’s chief executive, Christopher Ruddy, suggested that Fox had made a rush to judgment.

It’s beginning to sound like both O’Reilly and Newsmax were caught up in this awkward situation at the hands of Bill Spetrino, the economic figure behind the strange newsletter that started it all, and the man who sold the newsletter to the public in the video after O’Reilly. Spetrino has declined to comment thus far.