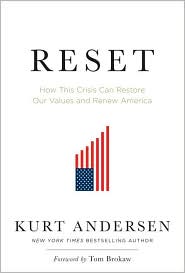 Public radio host and media maven Kurt Andersen is using a forward-thinking approach to promote his new book Reset: blogging about current issues and headlines in the context of the book’s thesis for Time.com.  Call it book excerpting 2.0.

Andersen’s take on the cultural issues and current events of the day are presented through the lens of the theme of his recently published tome: “how the meltdown is an opportunity to get ourselves back on track.” He explains it thusly:

Last winter TIME‘s editor Rick Stengel asked me to think about writing an essay for the magazine that would deconstruct “the end of the age of excess” — in other words to try to get a fix on both the American era that spectacularly ended last fall and the new era that might now emerge. During the six months since that first conversation, Rick’s notion has grown into a TIME cover story and now a book called Reset: How This Crisis Can Restore Our Values and Renew America.

I’m not by nature a Pollyanna or a Pangloss, always finding silver linings in bad circumstances or the glimmers of good amid rottenness. In fact, a large fraction of my career has been spent indulging in a fairly extreme and even giddy skepticism about the human comedy, whether in the satirical magazine Spy that I co-founded (with a fellow TIME alumnus) or the satirical novel Turn of the Century that I wrote.

The issues he covers are broad but the take is focused. Some sample headlines:

The reaction of current affairs from the former founder of such seminal publications SPY and Inside are not only entertaining, but serve as a reminder that Andersen may have been America’s first blogger (or at least helped pioneer that sensibility). Please enlighten yourself and read his blog.