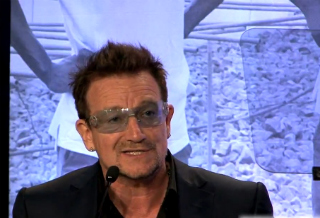 The Daily Caller reports that Friday afternoon at the Chicago Council on Global Affairs Food and Global Agriculture (mouthful!) symposium, U2 singer and humanitarian Bono declared that even though “we are broke,” we need to increase foreign aid budgets. And to those who disagree? Well, Bono says you’re all “brain-dead, heart-dead ideologues or controversialists.”

Bono spoke to the crowd about Europe’s debt woes, conceding that “we’re broke.” He continued on to explain that during these tough economic times, when he goes busking for foreign aid in Western capital cities, “the word ‘aid’ sounds like an expletive. It’s like you brought a bad smell into the room.” But despite the resistance, Bono insists, “we need aid.”

“Of course we still need aid. Of course we do,” he declared. “Does anyone disagree? Anyone apart from brain-dead, heart-dead ideologues or professional controversialists? Come on. Every sensible person knows that.”

It’s a common tactic to minimize the opposition by claiming that no sensible person could possibly disagree with you. (Hey, remember when President Obama said there was simply no disagreement that we need a government stimulus? And then this showed up.) Bono has mastered this tactic over the years.

Bono must believe that serious economists, scholars, and writers like Andrew Mwenda, Dambisa Moya, William Easterly, June Arunga, James Shikwati, Karol Boudreaux, and many others are all “brain-dead.”

It’s easy to claim everyone else is “heart-dead” when you believe you have millions of poor people on your side. But Bono is simply wrong about foreign aid.

We give billions in aid to oppressive regimes who predictably hide portions of the money in Swiss banks or spend it on lavish mansions and cars. Food aid gets stolen too. ABC News visited Kenya several years ago and met Kenyan farmers who said bags of food aid from their government never arrives. This is not surprising because many of the aid-recipient regimes are kleptocracies – that is, they thrive mainly on plundering from the citizens they govern.

Much aid is rewarded without regard for internal reforms, despite the fact that corruption, absence of private property protections, and lack of rule of law are some of the main reasons the developing world experiences crippling poverty. Dumping foreign aid on them has done nothing to liberalize those oppressive regimes and create the economic growth to lift the people out of poverty.

In the past 40 years, Western governments have given Africa more than half a trillion dollars in aid. Yet Africa is even poorer than it was before the money started rolling in. A study from the London School of Economics further confirms the failure of foreign aid. By reviewing the aid given to more than 95 countries, the study finds that ‘‘aid does not increase investment and growth, nor benefit the poor as measured by improvements in human development indicators, but it does increase the size of government.’’ Another comprehensive study by the IMF also found no relationship between aid and growth.

Foreign aid hasn’t accomplished its goals. Instead it has financed mostly authoritarian governments, whose destructive policies — trade protectionism, insurmountable licensing schemes, price and wage controls, nationalization of industries — have all been supported in some fashion by our foreign aid programs.

To say foreign aid is a failure is not to say that we, as individuals, should do nothing to help. There are wonderful charities that do actual on-the-ground work. Micro-finance organizations are another way to directly empower the impoverished.

But no, Bono, we do not need more government foreign aid. And it’s not “heart-dead” to think so.

Check out the clip below, via the Daily Caller: