BP CEO: Gulf Of Mexico Is A ‘Very Big Ocean’, Amount Of Oil From Leak Is ‘Tiny’ 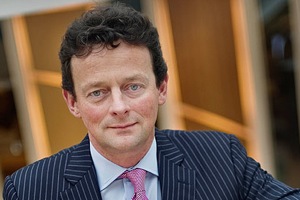 The CEO of BP, Tony Hayward, finally broke his public silence on the tragic Gulf of Mexico oil spill after letting COO Doug Suttles do most of the talking at press conferences, and he’s got great news for the Gulf of Mexico—contrary to what the Mainstream media has been reporting, the oil spill, which is leaking anywhere between 5,000 and 70,000 barrels of oil every day, is “tiny” compared to the size of the the entire Gulf of Mexico. And while he “guarantees” BP will stop the leak, “the only question is we do not know when.”

Sitting down with UK paper The Guardian, Suttles tried to put the spill, on track to being the worst in US history, in perspective– by comparing the amount of oil to the total amount of water in the Gulf:

Tony Hayward, the beleaguered chief executive of BP, has claimed its oil spill in the Gulf of Mexico is “relatively tiny” compared with the “very big ocean”.

In an bullish interview with the Guardian at BP’s crisis centre in Houston, Hayward insisted that the leaked oil and the estimated 400,000 gallons of dispersant that BP has pumped into the sea to try to tackle the slick should be put in context.

“The Gulf of Mexico is a very big ocean. The amount of volume of oil and dispersant we are putting into it is tiny in relation to the total water volume,” he said.

The rest of the interview is littered with allusions to the old BP administration, which Hayward suggests would have done a much worse job cleaning up the spill (which, considering the main line of defense against the spill is now an online suggestion box, seems improbable). He also slams the “speculation, red herrings, and hearsay” surrounding the disaster, and insisted that, just as other disasters had not stopped the growth of technology, the oil industry would not be slowed down by the leak. He also pointed out that he does not feel any job insecurity, but “that of course may change. I will be judged by the nature of the response.”

So let’s judge the nature of his response, that the Gulf of Mexico is a “very big ocean” that can take care of itself. First of all, the Gulf of Mexico is not “very big.” It’s not even an “ocean,” and it’s an insult to the intelligence of the millions around the world dependent on BP for energy to talk about the Gulf of Mexico as if it were a toddler that wet its pants, not to mention the media Hayward seems to be trying to exploit here. After spending the past few weeks tossing the blame around and getting scolded by the President for it, now BP is trying to convince people that, since it is their fault, it actually isn’t so bad. This is Iraqi Information Minister-level delusion, 2008 Terry McAuliffe-level delusion.

There is no possible way to convincingly minimize the devastation on both the environment and the millions of Americans that depend on that environment for a living, and, fortunately, from the ongoing, although tardy, response from the media, it doesn’t seem like they are susceptible to this kind of distortion of reality. If Hayward was attempting to assuage the panic in both the general public and the media, insulting their intelligence by minimizing the damage his company has done to the ecosystem of the southeastern United States is not the way to do it.