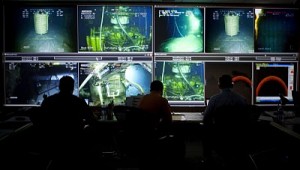 Just when you thought BP couldn’t sink any lower, think again. Yesterday, John Aravosis of AmericaBlog reported that a photo of BP’s crisis response room in Houston was doctored to look both busier and more recent. Not only that, the Photoshopping job is, to be perfectly honest, downright awful.

The image in question (left) features several employees in front of a bank of computer screens displaying live feeds from underwater cameras. In the original image, however, three of the screens are blank because, according to a BP spokesmen who spoke with the Washington Post, “BP usually has a couple remotely operated vehicles on the surface at any given time for maintenance.” Rather than leave the three screens blank, BP decided to work a little Photoshop magic and copy paste images onto the blank screens.

But as Aravosis points out, BP did a really bad job of it. If you enlarge the picture, it’s obvious that the pasted images are misaligned with the borders of the monitors and there is plenty of “jagged white space” around the employees where BP’s photographer did a not-so-professional job of blending the two images together: 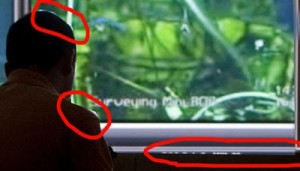 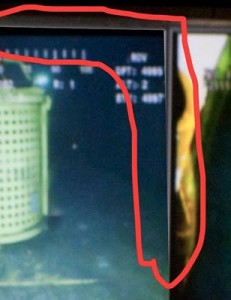 Even more awkward than the bungled Photoshop job, however, is the fact that the photo might not even be recent. Aravosis, tipped off by one of his readers, notes that the picture’s meta data indicates it was actually taken in March 2001 rather than in July of this year:

An astute reader noticed that the meta info for the photo says it was created in 2001, not July 16, 2010 as claimed on BP’s site. It looks like BP took a photo from 2001, and in order to make it look like the command center in July of 2010, they pasted pictures of the oil well leaking over the old photo.

Funny as the whole incident is, it doesn’t give you much hope about the future competency of the oil industry when BP can’t even manage to convincingly Photoshop a picture of its command center…