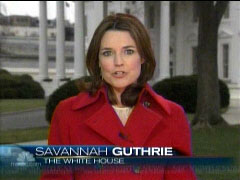 While the Keith Olbermanns and Bill O’Reillys of the world continue to live under the media spotlight, NPR’s David Folkenflik takes a look at another TV-news journalist, who gets considerably less media attention: Savannah Guthrie. In profiling Guthrie, NPR not only reveals more about her, but also examines an overall shift in cable news.

NPR says Guthrie, who is one of NBC’s White House correspondents and co-host of MSNBC’s The Daily Rundown, has “emerged as a rising star”:

“I’m constantly blown away by her range,” says an admiring Steve Capus, president of NBC News. “She’s had a very quick rise within the organization [and] has absolutely earned respect every step of the way.”

But the story is less about Guthrie herself and more about how she is an exception within a larger shift in cable news. Guthrie’s reporting is an example of the straight, hard-news reporting J-schools preach, but is less often present on cable news shows:

On cable, many of the more successful personalities find themselves standing out by adopting a sharper tone. Guthrie says she harbors no such desire, though the cable network on which she appears daily has won its greatest ratings successes by doing just that.

“I know what everybody says,” Guthrie says, “but … we just do straight news, and no one has ever asked me to do anything other than that.”

Juxtaposed with Fox News Channel’s Megyn Kelly and her “noticeably sharp tone,” Guthrie seems even less sensationalist. Yet sensationalist and opinionated has become the norm — and, as NPR states, the line is often blurred:

“The format looks like news,” says McGinnis, now associate dean of journalism at Stony Brook University. “You’ve got anchors. You’ve got people talking to reporters in the field. And I think viewers might be taken in by the fact that it looks so much like a news show.”

While NBC’s Steve Capus says the audience is smart enough to realize the difference between “shows with a lively political mix and those offering an ideological take,” he also makes it a point to say he is careful not to direct Guthrie on the latter path — “it would be a waste of her talent.”