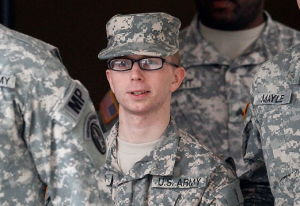 Editor’s Note: It was announced by the U.S. Army on Friday that Pfc. Bradley E. Manning, suspected of leaking thousands of documents to WikiLeaks, will face a court martial on 22 counts. If convicted, Manning, 24, could receive a maximum of life in prison. Last week, the entire parliamentary group of The Movement of the Icelandic Parliament nominated Manning for the Nobel Peace Prize.

In January, Mediate Founder Dan Abrams authored an editorial on Manning. We are re-printing it in its entirety.

For well over a year, many have feverishly raced to the defense of U.S. Army intelligence analyst Bradley Manning, accused of 22 criminal charges — including aiding the enemy — for leaking hundreds of thousands of pages of classified documents (and video) to Wikileaks. Late last month, for the first time, we finally heard his side of the story during an evidentiary hearing to determine whether he should be court-martialed. Many of his supporters, often at the courthouse daily clad in t-shirts emblazoned with his picture, must have been disappointed that Manning’s own lawyer hardly portrayed him as the grand patriot those defenders have depicted.

Hailed as a hero by some for exposing what they claim are U.S. government misdeeds, as well as illegal and immoral conduct, he has websites like BradleyManning.org devoted to him and many prominent supporters — aside from, of course, Wikileaks editor Julian Assange. Pentagon Papers leaker Daniel Ellsberg stated flatly that he “was Bradley Manning” and that he was profoundly affected by Manning’s decision to leak. “I never thought,” he said of Manning, “for the rest of my life, I would ever hear anyone willing to do that, to risk their life, so that horrible, awful secrets could be known.” Manning himself can allegedly be counted among those promoting the lionization of his image, accused of having said about his own conduct: “This is possibly one of the more significant documents of our time, removing the fog of war and revealing the true nature of 21st century asymmetric warfare.”

Unfortunately, that sort of principled position is far from what his own defense team suggests motivated Manning’s alleged perfidy. No, they appear to be pursuing the defense that he was a gay man in a Don’t Ask, Don’t Tell military, struggling with gender identity issues, who never should have had access to the files in the first place. His attorney focused on Manning’s alter ego, Breanna Manning, and quoted an email from Manning where he said his “entire life feel(s) like a bad dream that won’t end. I don’t know what to do. I don’t know what will happen to me. But at this point I feel like I am not here anymore.” That characterization suggests he was no hero; not a man standing for principle nor acting in the best interest of the country but, rather, a sad troubled soul worthy of sympathy. It is a defense which appears to concede that he leaked the documents but also abandons any pretense of righteousness in exchange for an apologia for his behavior. That is a trade Assange himself would likely detest since he complained to then New York Times Editor Bill Keller that a profile of Manning “psychologicalized” him while giving “short shrift” to his “political awakening.”

Sure, his lawyer also said the disclosures were relatively harmless. “The sky is not falling,” defense attorney David Coombs argued. He briefly invoked Martin Luther King on civil disobedience and cited the famous quote from Justice Louis Brandeis that “sunlight is the best disinfectant,” but the defense’s larger argument as to why he did it appears to be that Manning was a mentally disturbed individual who should have been stopped by his superiors. Essentially, the duty of stopping Manning from leaking the documents, goes this argument, would fall to superiors, because Manning was mentally incapable of stopping himself.

That, however, does not make the case any easier for the prosecution. Proving that Manning had the intent to provide the information to enemies of the United States may be difficult, and that could even lead to a plea deal on the horizon. Nor would this minimize legitimate concerns raised about his overbearing and solitary prison conditions which appear to have been improved.

Furthermore, this was a pretty pro-forma hearing. The defense comes into it knowing they will “lose,” that the case will almost certainly move forward no matter what they do. So, his sympathizers might argue, the defense called only two witnesses knowing that there was no good reason to pull out all the stops at this point in the legal process (some of the defense’s proposed psychological witnesses were also not permitted to testify).

Fair enough. But when it comes to a broad judgment about the man and his actions, his lawyers have left us with two choices for now: loathsome, as the prosecution asserts, or pathetic. No one inside the courtroom, at least not yet, is really arguing that he was valiant, courageous or heroic.