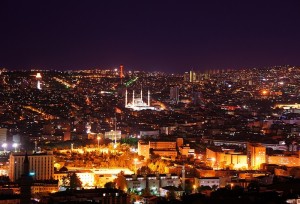 Elements within the Turkish Armed Forces are claiming to have successfully taken over the government in coup Friday night and early Saturday morning local time.

In the early hours of the coup, reports began coming in of gunfire in the Turkish capital city of Ankara and closures of major bridges in Istanbul, while witnesses reported low-flying jets and helicopters passing over the skies and tanks and armed soldiers patrolling the streets of both cities.

Hours later, footage from the streets of Istanbul showed scenes of chaos as civilians took to the streets in massive numbers amid frequent, pervasive sounds of gunfire. Some appeared to be carried away with injuries.

In a statement released on state broadcaster TRT, the Armed Forces announced that they had taken control of the country and imposed martial law. They have shut down all airports and ports and instituted a curfew. They have pledged to abide by all international agreements.

The scripted statement was reportedly given by soldiers to anchors to be read on the air.

“Democratic and secular rule of law has been eroded by current government,” the military statement said. They said that the country will be run by a “peace council which will ensure safety of the population” and that they want to create a new constitution “as soon as possible.”

BREAKING: State broadcaster TRT reading statement on orders of military, a new constitution to be prepared “as soon as possible”

BREAKING: “Democratic and secular rule of law has been eroded by current government” Military statement on Turkish TV #Turkey

BREAKING: Turkey now being run by “peace council which will ensure safety of the population” Military statement

An Englishman on vacation in Istanbul described to The Telegraph a scene of increased military and police presence throughout the city all day. He reports that a bartender told him, “The army are taking over everything.”

In a statement, the Armed Forces responsible said the coup is intended to wrest control from Turkish President Recep Tayyip Erdoğan, whose government has been criticized for its socially conservative, more strictly Islamist, and authoritarian policies. The coup is intended to bring about “friendly relations” with the rest of the world and to “restore democracy and human rights,” according to CNN’s Jim Sciutto who read a “rough translation” of the statement on the air.

Turkish Prime Minister Binali Yildirim said “it would be wrong to call it a coup” but confirmed this was an action carried out by “part of the military.” He urged calm and said that those responsible “will pay the highest price.”

Erdogan released a statement via Skype, affirming that the government was still in control and urging his supporters to go out into the streets. He served as Prime Minister of Turkey from 2003 to 2014 and assumed the presidency in 2014.

TRT subsequently went off the air. There are reports of an explosion at the TRT television building in Ankara.

The Turkey Secret Service building is on fire.

“Given the scale of the operation, it is difficult to imagine they will stop short of prevailing. It’s not just a few colonels,” a senior European Union source told Reuters.

Cemal Hasimi, the Turkish Prime Minister’s senior advisor, told CNN that the forces behind the coup were a “small group within the army,” and that government was succeeding in wresting control from them. “Protecting Turkish democracy is the most important thing to promoting regional and global security,” Hasimi said.

You can view a livestream of the events here:

Despite the curfew, videos and photographs shown large crowds pouring into the streets.

People ‘pouring onto streets’ in #Ankara #Turkey despite curfew after military coup https://t.co/p3243A96Bt RE pic.twitter.com/ic5d0bmT3s

Ataturk Airport in Istanbul has been closed. There are reports of gunfire at the airport.

BREAKING: Entrance to #Ataturk Airport closed, tanks deployed outside airport, as army confirms it has seized power in #Turkey

The Telgraph reports that both of Istanbul’s bridges across the Bosphorus had been “closed by the gendarmerie – a branch of the Turkish military dedicated to internal security.”

BREAKING Turkish PM Yıldırım to NTV: This is a mutiny attempt,we will not let this attempt win.We will uphold democ. pic.twitter.com/tgxXDUvFL5

Twitter is awash with videos of low-flying aircraft over the cities of Ankara and Istanbul as well as tanks and armed soldiers in the streets.

Another video showing an extremely low fly-by of a jet as emergency lights flash in downtown #Ankara #Turkey. pic.twitter.com/AtILvQ5XZc

Turkish soldiers block both bridges on the Bosphorus in Istanbul and jets flying low in Ankara. Reason not clear yet pic.twitter.com/tMG7KKYvGh

Lots of low flying military aircraft over Ankara in this feed. https://t.co/JdcdpGgu5S

UPDATE –– 7:34 pm EDT: There is a video going around Twitter showing a helicopter firing at something on the ground:

New footage shows helicopters firing a target on the ground in #Turkey: pic.twitter.com/PYY3Q0M8oV

UPDATE –– 7:44 pm EDT: There are now reports that a bomb has been thrown at the Turkish Parliament building.

UPDATE –– 7:53 pm EDT A spokesperson for Turkish national intelligence is saying the coup attempt has been “repelled.”

UPDATE –– 8:40 pm EDT: Members of the Turkish parliament are currently hiding in shelters:

Meanwhile, the state-run TV station TRT has been basically taken over by the military. A broadcaster earlier said they were forced at gunpoint to read a statement, and now this is happening:

Just got asked to leave work (the state broadcaster) by about 40 or 50 armed soldiers. They took our phones. #istanbul

CNN Turkey anchor says she’s being taken off the air by soldiers entering the studio. Live. And it’s off.

UPDATE –– 9:07 pm EDT: This image of an explosion at the Parliament building has been making the rounds on social media:

Photo best showing the moment of the explosion in Tutkey parliament where lawmakers are in the shelter pic.twitter.com/mKZsbtiX9x

And over 100 soldiers have reportedly been arrested.

UPDATE –– 11:30 pm EDT: The video below reportedly shows the chaos inside CNN Turk after the soldiers showed up:

Update — Saturday morning: The Turkish government now says the situation is “under control,” and places the death toll from the coup attempt at 161.