BREAKING: Palin And Christie Supporters Stunned To Learn That The Nile Is Not Just A River In Egypt 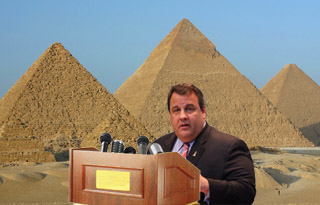 Throughout the country this week, online message boards are aflame with comments from confounded citizens, their emotions ranging from disappointment all the way to anger. These are the supporters of Chris Christie and Sarah Palin and their worlds appear to have been turned upside down as both politicians made stunning announcements that, contrary to hopes, the Nile is actually not just a river in Egypt.

The massive feelings of frustration could be clearly seen in the reactions of Mark and Johanna Wigfield, two Palin fans from Massachusetts who founded the organization Palin4Egypt, a grassroots group which, for the past seven months, had raised money and campaigned for the former Governor in the hopes that she would prove the river’s exclusivity.

“We left our jobs,” said Johanna. “We moved here to Iowa to try to persuade people about the river and Sarah. Our friends told us that we were crazy and that Palin didn’t care about the Nile, just about fame. We didn’t believe them. She acted like she was the one. And that the Nile was the one too. We feel lied to.”

“To be honest, we should have seen the signs. Sure, Sarah went on her Nile bus tour and appeared on all the Nile news shows but, if she really had ever planned on actually doing this, she would have actually had to have started working on something instead of just talking vaguely about the Nile all the time. We were foolish, I admit it.”

Neither Mark nor Sarah were comforted by Palin’s announcement that she would be the star of a new reality series, Sarah Palin: Alaska’s Rivers are Great Too!. Said Johanna, “We didn’t care about Alaska’s rivers. The Nile is the big one. We cared about it.”

While Palin’s supporters may have felt lied to, Christie has sworn that he did nothing to deceive anyone. Speaking recently to CNN’s Wolf Blitzer, he made that point clear.

“Look, I’ve been saying for months that the Nile isn’t just an Egyptian river. My answer never, ever changed. I appreciate that people wanted it to be true and wanted me to prove it, but it just wasn’t the case. I really don’t know how many times I had to give them an unequivocal answer before they just stopped asking me. Frankly, it’s ridiculous.”

However, while the supporters of both Christie and Palin are feeling disappointment this week, the ones hit hardest are probably those in the media.

For years, news outlets have written breathless accounts of Nile campaigns for both politicians despite numerous signs that the stories were, at best, wrong and, at worst, completely and utterly irrelevant. It is because of this that those in the media are having the hardest time taking no for an answer.

“I’ve been working really hard about this piece on the political significance of Palin’s Nile run,” said a source at a major cable news channel who wished to remain unnamed. “I think I’m just going to run it anyway. After all, she could change her mind. There’s always a chance.”