Kilmeade And Friends - Brian And The Judge | Brian Kilmeade

Brian And The Judge Go Separate Ways – Kilmeade On Radio, Judge On FBN 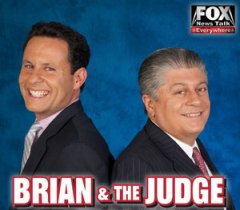 This replaces Kilmeade’s former radio show, Brian and the Judge, that he co-hosted with Andrew Napolitano. But the Judge has a new gig too.

Napolitano will begin hosting a new Fox Business Network weekend show, Freedom Watch, according to the site set up (by fans) to promote the program (that started as an online entity on FNC’s Strategy Room). There is no official word from FBN on when the show begins.

Meanwhile Kilmeade’s radio show will put the focus on him, while also entertaining the “friends” aspect frequently. According to the release, “The new program will also feature a variety of FNC correspondents on an occasional basis including Kilmeade’s co-hosts on FOX & Friends, Gretchen Carlson and Steve Doocy.”

Kilmeade and Friends will serve as a news-driven, interview and commentary show focusing on the latest national and international news, politics, sports, movies, music and pop culture. Key newsmakers as well as a wide array of well-known movers and shakers in the worlds of news and entertainment will be featured on the show. The new program will also feature a variety of FNC correspondents on an occasional basis including Kilmeade’s co-hosts on FOX & Friends, Gretchen Carlson and Steve Doocy.

In making the announcement, Magee said, “Brian is an exceptionally talented host in both the television and radio industry. We are thrilled to be working with him on this endeavor that will showcase his unique style and ability to engage listeners on a wide-range of topics and issues.”

Kilmeade added, “I’m really excited to be starting my own show after four sensational years co-hosting with the Judge. I’m honored that FOX News thought enough of me to let me pilot alone. The new show Kilmeade and Friends will be a great chance for the listeners to hear more from their favorite FOX personalities.”