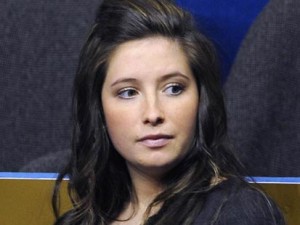 Bristol Palin had some fightin’ words about President Obama on Thursday, regarding his invoking Malia and Sasha Obama in his announcement about supporting same-sex marriage. While it’s great to listen to your kids, she said, sometimes “dads simply need to be dads.” Thank goodness they’re not younger. Or, you know, we’d be looking at Dora the Explorer for attorney general.

In Obama’s remarks, he said Malia and Sasha have friends whose parents are same-sex couples. He added, “There have been times where Michelle and I have been sitting around the dinner table and we’re talking about their friends and their parents and Malia and Sasha, it wouldn’t dawn on them that somehow their friends’ parents would be treated differently. It doesn’t make sense to them and frankly, that’s the kind of thing that prompts a change in perspective.”

Palin, in a blog post entitled “Hail to the Chiefs — Malia and Sasha Obama,” wrote:

So let me get this straight – it’s a problem if my mom listened too much to my dad, but it’s a heroic act if the President made a massive change in a policy position that could affect the entire nation after consulting with his teenage daughters?

While it’s great to listen to your kids’ ideas, there’s also a time when dads simply need to be dads. In this case, it would’ve been helpful for him to explain to Malia and Sasha that while her friends parents are no doubt lovely people, that’s not a reason to change thousands of years of thinking about marriage. Or that – as great as her friends may be – we know that in general kids do better growing up in a mother/father home. Ideally, fathers help shape their kids’ worldview.

In this situation, it was the other way around. I guess we can be glad that Malia and Sasha aren’t younger, or perhaps today’s press conference might have been about appointing Dora the Explorer as Attorney General because of her success in stopping Swiper the Fox.

Phew. Good thing we avoided that one. Her message to the president: be an “actual leader” instead of “merely reflecting what many teenagers think after one too many episodes of Glee.”