Business Insider And Samsung: How Should Editors Disclose And Handle Sponsorships? 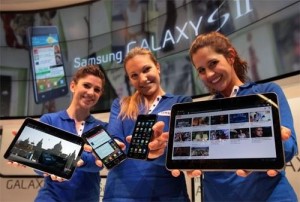 It’s a question that keeps popping up – and increasingly so, given the increased cachet enjoyed by bloggers in recent years: How should editors (as in, the fancy term for “blogger”) handle writing about press junkets that they’re able to attend thanks to sponsorships by major companies?

Two well-known bloggers have already weighed in on a recent case involving Silicon Alley Insider’s Dan Frommer decision to cover a junket in Barcelona, sponsored by Samsung, as an editorial post.

Writing for the Columbia Journalism Review, Felix Salmon notes his qualms over Frommer’s Samsung-sponsored trip to cover a tech junket in Barcelona. His major issue relates to the very definition of “sponsorship,” which implies that an exchange is in place. We know what Frommer and other bloggers are getting out of such a deal – comped airfare, access, etc. – but what do companies like Samsung expect or receive in return?

For one thing, Frommer’s not just scrounging up whatever’s necessary to get him to the conference and report. He’s was flown over “in posh business class,” which almost certainly means posh hotels and expensive jamón iberico as well. Samsung is doing its utmost to buy his goodwill: why is he letting them get away with it?

On top of that, Samsung is loving the ubiquitous disclaimer — it provides fantastic free marketing for them in every post. Frommer might think he’s somehow neutralizing the junket by disclosing it; in fact he’s giving Samsung vast amounts of exactly what they want most.

Most tellingly of all, Samsung isn’t really “sponsoring” Frommer at all — especially not if, as seems logical and as Barret reports, other bloggers at the conference are getting the same deal and not disclosing it. Sponsorship involves a trade of some description: we give you money, you give us some kind of ad space or exposure. If Samsung is getting nothing explicit in return, then it must be getting something implicit instead.

Over on Forbes‘ site, Victoria Barret, while also noting some of the more problematic aspects of such an arrangement, focuses on some of the positives:

SAI’s business model simply doesn’t pay for flights and hotel stays. Frommer will bring insight from Barcelona back to New York. That’s good for everyone.

And to be fair, Frommer’s earlier posts on Samsung don’t stand out as fawning, and his coverage of the event has been dominated so far by Google Android news, the Microsoft-Nokia union, and slide shows of phone photos with no obvious Samsung slant in either direction. He deserves credit for disclosure, too. (Frommer, I should disclose, used to write for Forbes.)

I can’t help but agree with Salmon’s assessment that “sponsorship” means something – specifically, a deal or a “trade” between a company and a member of the press / media that proves beneficial for both parties. And, at a time when many businesses are hurting for money, it’s true that a number of writers wouldn’t have access to certain events were it not for companies pitching in. But, even if writers disclose a sponsorship, readers will nonetheless remain uncertain about whether they’re receiving unbiased coverage, or coverage that neglects other brands or businesses.

There are, of course, a few possible solution, one being that writers who receive sponsorship could, after disclosing said sponsorship, cover only programs and products offered by their sponsor with no set obligation to write only favorable reviews, at the risk of losing credibility.

This is a model that isn’t markedly different from that used by many magazines and independent bloggers, who often receive free products and access to events their readers may not have otherwise heard about. Is this good journalism? That’s debatable. The real question facing companies is whether or not such a model makes for good marketing, or works to alienate savvy online readers who can recognize a deal at work when they see it, regardless of whether such a deal is or is not disclosed.