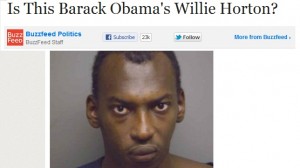 It looks like the Ben Smith-era Buzzfeed (BenFeed?) is becoming the go-to repository for political oppo leaks, but they’ve taken spin stenography to a whole new level with a Drudge-ready item that asks if accused murderer Kesler Dufrene is “President Obama‘s Willie Horton.”

Setting aside the fact that Buzzfeed doesn’t seem to know what a “Willie Horton” is, what are they doing flack-parroting for the GOP?

There are two huge problems with this item. First, there’s the substance. From Buzzfeed:

Is This Barack Obama’s Willie Horton?

There’s a long political history of tying a politician — from Michael Dukakis to Mike Huckabee — to a dangerous felon who was released and committed more crimes. A Republican points BuzzFeed to this Miami Herald article about Kesler Dufrene, a convicted felon released by immigration authorities because of a moratorium on deportations to Haiti. He’s accused of three murders, including that of a 15-year old girl.

But as yellow as this tactic was when used against Dukakis and Huckabee, at least in those cases, the actions that led to the release of these men were rooted in policy judgments by Dukakis and Huckabee that were actually related to their crimes. Willie Horton committed violent crimes after being released on a furlough program that Dukakis supported. Maurice Clemmons murdered four police officers after then-Gov. Mike Huckabee commuted his 108 year sentence.

Kesler Dufrene (who shot and killed himself in a standoff with police), on the other hand, is accused of committing crimes after serving his full prison term, and his release, while disastrous in retrospect, isn’t really comparable to Horton’s and Clemmons’:

The episode is a black eye for U.S. authorities, who by law could not detain Dufrene indefinitely after the Obama administration ordered a temporary halt of deportations to the island nation. The deportations were halted because of the carnage wrought by Haiti’s January 2010 earthquake.

You all remember the devastating earthquake in Haiti, right? Kesler Dufrene’s deportation order wasn’t carried out because there was no place to deport him to. This wasn’t some bleeding-heart lapse in judgment, it was an act of God.

Still, if some political operative like Karl Rove, or someone from the Romney or Santorum campaigns, wants to make the argument, fair enough. Reporters get scads of oppo memos in the mail every day, and often, the sender is as newsworthy as what they’re sending.

When an oppo leak is too dirty, or too silly, for a political operation to have their fingerprints on it, you get this kind of leak; quick and anonymous. Sometimes, it backfires, as when Matt Drudge outed Hillary Clinton‘s campaign for distributing a photo of then-Sen. Barack Obama in a turban.

But even in these cases, it’s usually a complete package. “Here’s video of so-and-so saying x in 200?,” or “Here are links to legislation that whatzit signed before he was against it.”

In this case, you have a Republican operative essentially creating commentary, anonymously, and having it repeated by Buzzfeed, uncritically. Does Buzzfeed think this is “Obama’s Willie Horton?” Does anyone? There’s nothing wrong with aggregating opinion, but it has to actually be someone’s opinion.