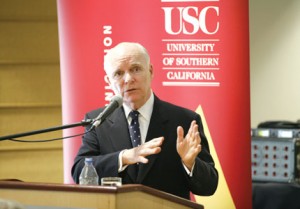 C-SPAN and their practice of airing primarily unscreened callers completely live made headlines on Monday when “Bill from St. Paul” called in to complain about the number of black callers. What shocked people was that host Bill Scanlan let him get through his entire racist rant. A few few nights later, The Daily Show even did a whole piece on it where Jon Stewart attacked Scanlan for not cutting Bill off. Today, Congress.org posted an interview they did with Brian Lamb, the founder and CEO of C-SPAN, who made it clear that the network is not going to change their screening process (they only keep out callers who are intoxicated, incoherent, or call too frequently) any time soon.

“‘We have not done it and we will not do it,’ he said. ‘It sounds goofy in some people’s mind, but it’s the people’s network. … The idea is to let it go, let it flow, let them say exactly what they want to say. Don’t be so jumpy that you think you know better than they do. And you know, there’s a lot of wisdom that comes through those calls.'”

Lamb is also questioned about Scanlan’s stone-faced reaction to the caller. While he said he has long questioned whether to censor or censure offensive callers, this is another piece of protocol that doesn’t seem like it’s going to change. “It’s every host’s personal decision,” he says. “Some are more tolerant than others.”

We’re going to have to agree with him. While Stewart was funny the other night, Scanlan’s lack of judgement fits into what C-SPAN is supposed to be. The racist caller’s comments were clearly disgusting but once you start deciding who can and cannot have their opinions heard, then your network is no longer truly objective. A C-SPAN that slowly dips towards Fox News or MSNBC territory is something that just cannot be allowed.