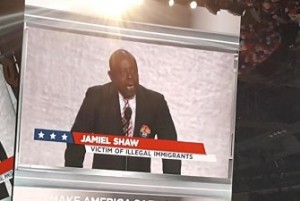 Following their drubbing in the 2012 election, Republicans produced a document nicknamed an “autopsy report” that detailed what went wrong, most of which had to do with being too hostile towards anyone who isn’t a white heterosexual male, but in particular, to the crucial Hispanic voting block. Four years later, the Republican Party has not only succumbed completely to overt racism and xenophobia in the form of presumptive nominee Donald Trump, they’ve also gotten in on the act themselves.

One longstanding feature of the Trump stump has been the exploitation of families who have lost a loved one to crimes committed by undocumented immigrants, which Trump calls “illegals.” That term is considered a slur by many voters, particularly Hispanic voters, but has become a badge of defiance among Trump and his fans, who view any attempt not to be racist as “political correctness.”

For the Trumpists to do this is one thing, but the Republican Party, which has tried to maintain some sort of fictional boundary between supporting Trump and supporting his racism, got in on the act Monday when they labeled the speeches of three family members with this chyron:

Even in the “politically incorrect” formulation of Trump racists, this chyron is over the top, posing the departed loved one, in this case Jamiel Shaw II, as a “Victim of Illegal Immigrants,” as if they all just got together one day, which they surely will if we don’t deport them all.

What’s fascinating, though, is that both CNN and MSNBC managed to cover portions of the three speeches without ever showing viewers that the RNC is labeling “illegal immigrants” murderers, let alone commenting on it. After I saw that tweet, by Redstate editor Caleb Howe, I went looking for a better shot of it from TV, but the networks all substituted their own PC graphics, rather than show the RNC’s favored description. For example, here’s how MSNBC handled Jamiel Shaw‘s speech:

Whether or not this was a conscious decision, what the media is doing by ignoring this is allowing Republicans to continue pretending they can support Trump without supporting his racism.