The production company Punched in the Head recently put out a casting call looking for white victims of discrimination––for what they advertised as a documentary for MTV about race––and anyone who feels they’ve been given advantages because they’re white. The Craigslist ad they put out got some attention; here’s what it said:

When You’re White, it can be difficult to talk about race.
Casting for an MTV Documentary: Are you white? Do you have a story to tell? We want to hear from you.
Is race an issue in your family, community or school? Is something making you question possible advantages you’ve had as a white person? Are you being discriminated against for being white? Are you having a problem with race on social media? Is something happening in your life that’s making you think a lot about race, or what it means to be white?

And if you go to the Punched to the Head website, they go into greater detail about what they’re looking for.

Here are some highlights: 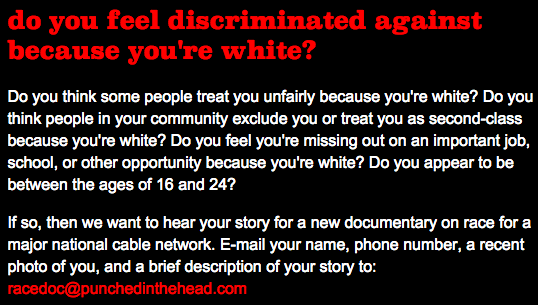 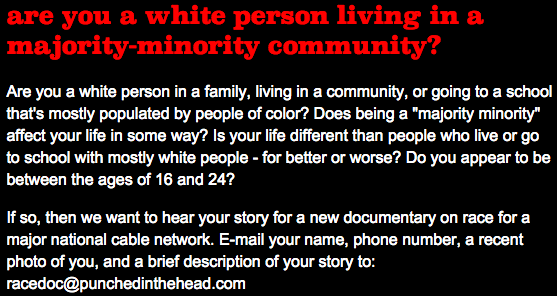 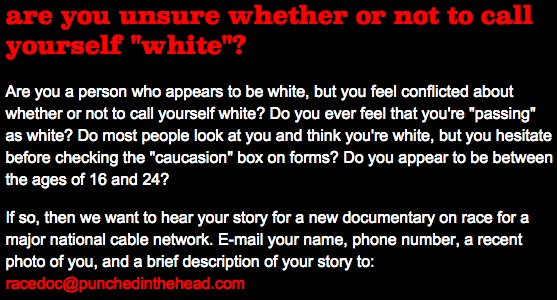 This would appear to be for MTV’s previously announced “Untitled Whiteness Project,” described as “a documentary-style program that will explore how millennials navigate diversity and what it means to be a young white person in America in 2014.”

And here’s how one MTV executive explained the goal of that project a few months ago:

There’s an opportunity to open up and explore by putting the spotlight on the experiences of young white people as they’re navigating the college admissions process or they’re wondering how come there are diversity clubs for all these different groups, how come there isn’t a white club?… There will be instances in which we need to make clear that there are privileges that people have inherently — if that’s class, if that’s race, if that’s gender.

[h/t The Grio]
[image via screengrab]