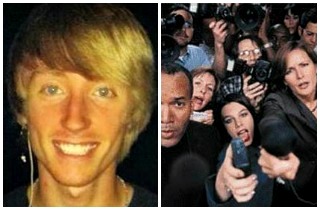 There is no greater hatred than that born out of affection spurned and trust betrayed. Yesterday, the media loved Chad Henderson. Today, they hate him.

He, along with a handful of other individuals, were recently the subject of profiles in the press demonstrating both how navigable the exchange system is and how they are benefiting under the Affordable Care Act. It’s difficult to overstate how absurd the media coverage of Henderson’s reportedly successful effort to sign up to health care exchange has been.

Henderson’s story was particularly attractive. He was precisely what the media, and the White House, needed: a young, ostensibly healthy individual willing to pay a substantial portion of the meager income into the system so that it can support older, more chronically ill patients who will be partaking in health care services regularly.

According to Henderson’s father, Bill Henderson, neither he nor his son have enrolled in any plan associated with the ACA. “As of yet, however, the pair had not picked a plan or completed enrollment,” reported Reason’s Peter Suderman. “ But he hoped they would shortly.”

Suderman goes on to note that the other details Henderson provided the press were “difficult to verify.”

Additionally, Chad could not have purchased a separate plan for his father from his own login to HealthCare.gov, the website for the federal exchanges. A customer assistance representative on HealthCare.gov’s LiveChat system told me that purchasing separate plans for a son and a father in Georgia would require two separate logins. Which means that Chad would have had to successfully create two different accounts, and complete enrollment twice, at a time when almost no one was able to get through on the system.

This is not say that Henderson is not still valuable to the press. On Thursday, his story provided Mediaite readers with entertainment after reading the comically absurd deluge of press interest he was exposed to for simply being able to complete the reportedly three hour process of signing up for a health care exchange. On Friday, Henderson provided the nation with another service: exposing the media’s interest in painting the ACA in a positive light regardless of the facts.

RELATED: Chad Henderson Signed Up for Obamacare and Every… Single… Media Outlet Is on It!

“Just moments after writing a blog post Thursday morning, about the lack of information on Obamacare enrollees, Enroll America reached out with contact information for Chad Henderson, a 21-year-old in Georgia who had successfully enrolled in coverage on the federal marketplace,” wrote Washington Post WonkBlog reporter Sarah Kliff.

“I’ve read a few articles about how young people are very critical to the law’s success,” he told me. “I really just wanted to do my part to help out with the entire process.”

Kliff notes that Henderson told her that he purchased an insurance plan with a $175 per month premium – higher than Henderson would have liked, but still affordable. The end.

“Reporters are clogging Henderson’s voicemail, pro-Obamacare forces are holding him up as a poster child of the health law and administration officials are giving him shout-outs on Twitter,” reported POLITICO’s Kyle Cheney. “He has been uninsured since he was around 6 years old when his father, a single parent, could no longer afford coverage.”

“It is such a huge honor,” Henderson, a student with a part-time job at a day care center, said of the flood of attention. “The fact that the White House shared my story and Enroll America asked me for some help is a major blessing to me.”

“Enrollment took three hours, mostly because the system crashed every time he tried to create an account,” Cheney continued. “Once he got through that step, he said the process was simple.”

The father and son signed up for a bronze plan in Georgia’s federal exchange, the lowest cost, least generous level of coverage available, Henderson said. Anything more comprehensive would’ve been too costly.

This is an impressive level of detail for a story that is entirely false, according to the subject of this paragraph.

“We stood on there until about 3 in the morning,” Henderson told The Huffington Post. “Once I created an account, there were hardly any glitches at all after that.”

“I can’t remember a time when my dad has gone to the doctor,” Henderson continued, leading HuffPost’s Jeffrey Young by the nose. “He’s just sucked it up.”

He described his father, who reportedly makes just $24,000 as a shaved ice salesman, as “old school” who wants Henderson to “take responsibility” for his own health coverage.

Young lamented that, due to the lack of Medicaid expansion in Georgia and Henderson’s above the poverty line income threshold, Chad would have to pay his own premiums.

“This is more of a benefit for me and more of a security thing for him, because he’s getting to that age where anything could happen at any time,” Henderson concluded, touchingly.

According to Reason, that’s all bunk. But it was a story too good to check out. And it was exactly the story the media needed at precisely the time they needed it.

Henderson’s tale is a blistering critique of how the press operates today. If you invented Henderson and the story of how his actions stripped the media naked, you would be accused of making up a wild fabrication that no one could possibly believe. It’s all too fantastic, the media too credulous, the principal subject too sloppy to be believed.

In fact, as it appears now, how Chad exposed the media is the only part of his story that’s true.