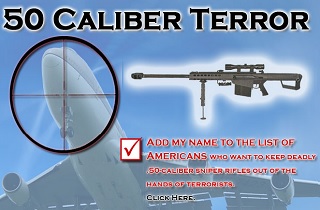 If there was any doubt that Governor Chris Christie (R-NJ) was planning a presidential run for 2016, he may have erased it late Friday with an end-of-news-cycle veto of a ban on .50 caliber firearms, whose manufacturer used to brag was “capable of destroying multi-million dollar aircraft with a single hit delivered to a vital area.”

As governor of a state with some of the strongest gun control laws in the country, the .50 cal ban gave Christie a rare chance to let the NRA know he’s got their back.

Christie was once a supporter of the ban on .50 caliber guns, but said he vetoed it because it would have actually banned the guns:

The bill that passed New Jersey’s Democratic legislature would have prohibited the Barrett .50 caliber long-range rifle. Although Christie this spring proposed a ban on future sales of the firearm, he vetoed the ultimate bill because he said it went too far, requiring residents who already own the rifle to give theirs up.

In a veto message to the General Assembly, Christie wrote that the bill “will not further our collective fight against crime, but serve only to confuse law-abiding gun owners with the threat of imprisonment for lawful recreation. I cannot approve of that result.”

Lawful recreation. So being able to shoot down an airplane is now equivalent to joining a softball team. The usual argument that society should bear the risks of unfettered gun ownership for the right of self-defense or good ol’ huntin’ and varmintin’ aren’t even in play when it comes to the .50 cal, which its manufacturer and inventor describes as “”a target rifle. It’s a toy. It’s a high-end adult recreational toy.”

That manufacturer, Ronnie Barrett, recently announced that he would not sell his product to law enforcement agencies in New York state due to their .50 cal ban. In a 2009 interview with 60 Minutes, he tried to downplay the risks associated with the .50 cal:

“The .50 has an excellent record. You know, as far as the abuses with .50-caliber rifles, they are so few, if any, that all other calibers ought to aspire to have as good a record as it has,” says Barrett. “And it’s a long rifle. When you hear people say it’s a criminal’s weapon, this is 5-and-a-half feet tall, or something like that. This is not a weapon that a criminal would use.”

That comparative claim is somewhat beside the point, given the expense and size of the weapon, but the Violence Policy Center has compiled a decent list of .50 cal crimes, The real danger of such a weapon is its capability:

A marketing brochure from Barrett Firearms boasts that its 50 caliber sniper rifles are capable of destroying aircraft with a single shot. The company brochure released today by the Illinois Council Against Handgun Violence states that jet engines and helicopters “are likely targets for the weapon [50 caliber sniper rifle], making it capable of destroying multi-million dollar aircraft with a single hit delivered to a vital area.”

With an effective range of over a mile, Barrett’s creation has many other applications, in the hands of a motivated bad guy. In that interview with 60 Minutes, Barrett unconvincingly tried to walk back his brochure’s claim:

Could the gun be used by a terrorist to shoot down a commercial airliner?

“It’d be very difficult. It would if it were a tactic that were even remotely possible,” says Barrett. “Then our military, who happens to use the rifle, would be training their troops to do such.”

But in his sales brochures, Barrett advertises the .50-caliber as a weapon that can take planes down.

“There’s some military brochures that we had early on that showed that you could damage aircraft on a runway or Scud missiles and things like that,” says Barrett. “Yes, you could if you have a parked target.”

But jet engines somehow grow thicker while in flight? As a matter of fact, though, Barrett’s brochure doesn’t mention parked targets, and even boasts that “a round of ammunition that can be purchased for less than 10 USD can be used to destroy or disable a modern jet aircraft.”

Those denials melt away later in the interview, however, when Barrett is confronted with some quotes from gun regulation advocate Tom Diaz:

“I consider some of the stuff Tom Diaz lays out irresponsible,” says Barrett. “I know a lot of things, but I’m not going to go on the television and tell people what the capabilities of equipment are and possibly give ideas to people.”

Is what Diaz is saying accurate? “Yes, it could be. But it also, seeming begging someone to commit this crime. Somebody please commit this crime so I can validate what I’ve been saying so long,” says Barrett. “And it’s repeated over and over, and I fear that somebody will answer that call.”

Diaz disagrees. “Its kind of a classic gun-industry argument,” he says. “First, they deny there’s a problem and then when something happens, they point the finger at people who tried to warn about it and say you guys caused this and you just hoped it would happen.”

It is surprising that, given this weapon’s capabilities and limited legitimate use, they haven’t already been banned, or at least regulated the way we do machine guns. By vetoing this bill, which passed by wide margins in both houses, Chris Christie has clearly disregarded the democratic will of the people of New Jersey, and the state’s longstanding support for strong gun regulations, in the name of “recreation.”

Here’s something for Governor Christie to think about as he allows these weapons to be sold in our state, where one of the 9/11 airplanes took off from. From an NRA press release:

They aren`t used in crimes, but they might be one day.1 Not just any crimes, of course. No, they won`t be used to rob liquor stores, settle disputes between rival drug-trafficking gangs, or commit other crimes that happen in the real world. Costing thousands of dollars, measuring 4-5 feet in length, and weighing 22-34 pounds, they`re way too expensive and cumbersome for run-of-the-mill lowlifes. But, claim a few of the most radical anti-gun activists, they might–just might–be used to damage power transformers, armored limousines, and helicopters, crimes which may not make the police blotter in your (or anyone else`s) home town, but which happen all the time in “action” novels, movies, and TV shows, and, evidently, in the activists` imagination. Ridiculous in the extreme, this fear-mongering is currently being peddled by–you guessed it–the Violence Policy Center (VPC).

That press release, describing the “ridiculous” scenario that could obviously never happen, was published on August 28, 2001.