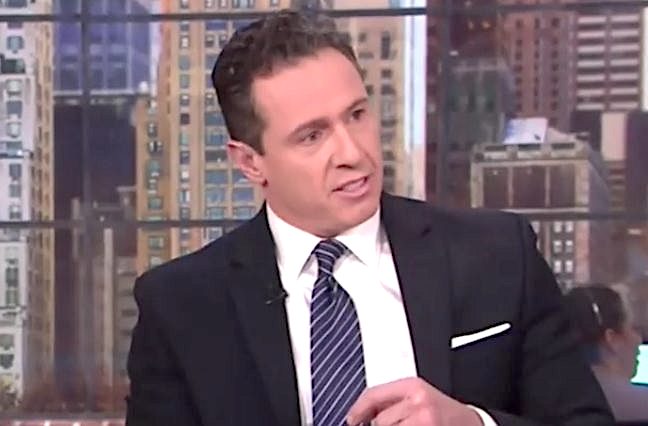 CNN has been under fire Tuesday for a report published by its KFILE reporting unit which appeared to threaten to out a Reddit user who made a video of President Donald Trump wrestling WWE Founder Vince McMahon with the CNN logo superimposed over his head.

Now, one of the network’s most prominent anchors has deleted a Tweet from early Wednesday on the subject.

Early Wednesday, New Day anchor Chris Cuomo asked his followers whether they felt the Redditor’s name should be published: 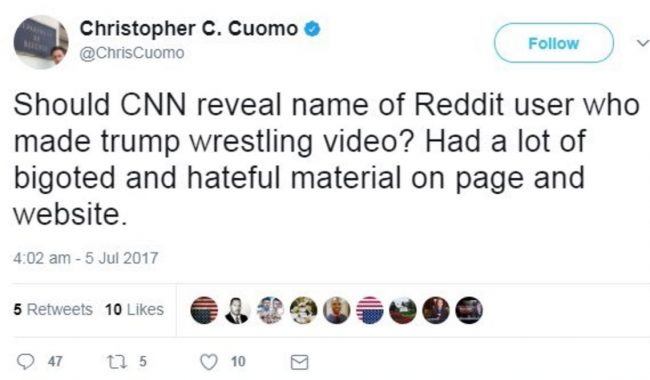 But Cuomo deleted the Tweet without explanation. He has engaged with other Twitter users on the subject, but has not addressed the deletion of that particular Tweet:

like your source that reddit guy is a teen? bs. and potus uses un named sources as well. this is all nonsense https://t.co/KotDG20fck

WH says potus didnt get clip from that man…so where did he find it? dont you want to know? https://t.co/T2Pmzhl4Cs

You are fact-poor, governor. You see what this man put out on his site? You think it is all humorous? https://t.co/OjLo2WkigH

Oh, I believe in the right AND the responsibility. Bigotry should be exposed and confronted in America. https://t.co/IFU7VQmIvW

I have no problem with CNN video. Bigotry is something else. Feeding anti-semitism is disgusting. People taking up for him and that? Bs. https://t.co/bGH8aqvaiB

The man (not teen) wasn't exposed. He apologized before being contacted according to kfile. Look at who is complaining…this is bs https://t.co/02yPAJA9Cn

“Any assertion that the network blackmailed or coerced him is false,” the statement said.