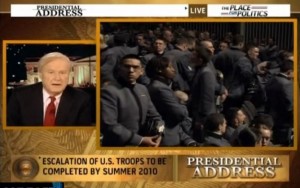 During last night’s analysis of President Obama’s speech at West Point, MSNBC host Chris Matthews made a stunning analogy that set the conservative blogosphere atwitter. Matthews claimed that the Commander-in-Chief of the US Military “went to maybe the enemy camp tonight to make his case.” Perhaps in response to the immediate reaction online (and an uncharacteristic calling out by Greta Van Susteren), Matthews later clarified his statement.

It seems like in this case there isn’t a lot of excitement. I watched those cadets, they were young kids, men and women who are committed to serving their country professionally, it must be said, as officers, but I didn’t see much excitement. But among the older people there I saw, if not resentment, skepticism. I didn’t see a lot of warmth on that crowd out there that the president chose to address tonight. And I thought that was interesting. He went to maybe the enemy camp tonight to make his case. I mean, that’s where Paul Wolfowitz used to write speeches for, back in the old Bush days. That’s where he went to rabble rouse the whole “we’re going to democratize the world” campaign, back in ’02. So I thought it was a strange venue.

Van Susteren aired the clip on rival Fox News network with a simple “did we hear this right?,” adding later, “Enemy Camp? What did that mean? President Obama just finished a major speech at West Point. Is Chris Matthews saying that that’s the enemy camp?”

Later in the evening, Matthews came back on air to clarify his comment, saying “He went up there to West Point, and maybe earlier tonight I used the wrong phrase ‘he’s in enemy camp.’ But the fact of the matter is that he went up to a place that’s obviously military, their volunteer army. You have officers up there, people who have been tough…McChrystal, Patraeus… identify with the Bush strategy, much tougher, more hawkish it was almost like he telegraphed the fact that what was changing sides on the issue from dove versus hawk.”