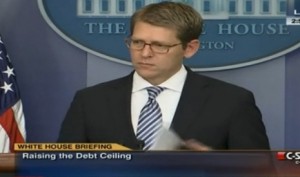 One of the more amusing sidenotes (well, the only amusing one) of the upcoming debt ceiling deadline, which features a Republican threat to cause the U.S. government to default, and a promise from President Obama not to negotiate on the matter, is the notion that the President could order the Treasury to mint a $1 trillion platinum coin, and use it in lieu of a debt ceiling increase. At today’s White House daily briefing, NBC News’ Chuck Todd pressed Press Secretary Jay Carney to rule out that option, and while Carney said there is “no substitute” for congressional action on the debt limit, he arguably did not rule it out.

The federal government will hit its borrowing limit around February 15, and unless Congress raises the debt limit, the result will be a government default that even Republicans acknowledge would be a global financial disaster. Republicans have stated their intention to extract political concessions in exchange for raising the limit, while the President insists he will not “play that game.”

However, unless Republicans relent, the President only appears to have two options: the so-called “constitutional option,” and the novel “Trillion Dollar Coin” option.

The President has kind of ruled out the Constitutional option, whereby he unilaterally raises the debt ceiling under an interpretation of Section 4 of the 14th Amendment, which states that “The validity of the public debt of the United States, authorized by law, including debts incurred for payment of pensions and bounties for services in suppressing insurrection or rebellion, shall not be questioned.”

President Obama didn’t quite rule this option out during the last doomsday threat, but ultimately failed to exercise, saying at one point “I have talked to my lawyers. They do not — they are not persuaded that that is a winning argument,” and since then, the White House has said the option is“not available” to the President.

That leaves the popular-among-wonks “Platinum Coin Option,” whereby the U.S. Treasury simply mints a pair of $1 trillion platinum coins, and deposits them into the treasury. NBC News’ Chuck Todd asked Jay Carney about that option at Wednesday’s briefing. “I know your position hasn’t changed on the 14th amendment,” Todd said, “but do you have a position on this trillion dollar coin business?”

Carney replied that “the option here is for congress to do its job and pay its bills, bills that have already been racked up.”

Todd asked Carney “Do you believe you have this power to…”

“There is no plan b,” Carney interjected. “There is no backup plan. It is congress’s responsibility to pay the bills of the United States,” and reiterated that “there is no alternative to Congress raising the debt ceiling.”

Chuck said Carney was “a little evasive in your answer. Are you trying to leave room or not…”

“There is no substitute for congress extending the borrowing authority of the united states,” Carney replied.

Todd pressed him a few more times, and while Carney continued to insist that congressional action is the way to resolve the debt ceiling, he never actually ruled it out.

In fact, the White House has never completely ruled out the “Constitutional Option,” either, although they are strongly indicating that neither option is on the table. In a standoff like this, however, that’s just what you’d expect. If Congress were given a chance to let the President raise the debt ceiling unilaterally, and eviscerate him in the process, of course they would take it. The platinum coin and the 14th Amendment are off the table…until they aren’t?