Chuck Todd: Trump’s Lead Is Not the Media’s Fault 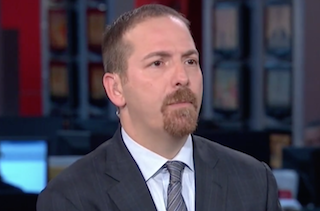 Chuck Todd had an interview with TheWrap today, where he talked about matters ranging from the debut of MTP Daily, to whether the collective media atmosphere is to blame for the negativity presidential candidates occasionally face.

Eventually, Jordan Chariton asked Todd for his thoughts about whether MSNBC and CNN were responsible for Donald Trump‘s lead due to the copious amounts of coverage of his repeated “filibustering” of policy specifics.

Todd noted that Trump seemed measured while promoting his tax plan today, unlike most days when he gives his speeches off the cuff. As he went on, Todd explained that the media’s obsession with Trump has more to do with the fact that he is a much more accessible candidate than many of his competitors and predecessors.

“For a couple decades, the conventional political consulting decisions were to avoid the media, try to go above and around them,” Todd said. “Donald Trump’s mindset is be accessible…The one lesson other campaigns have learned from Trump is ‘maybe I shouldn’t be afraid to talking to multiple media outlets on any given day.’”

Todd was also asked about whether Trump has actually been encouraging candidates like Mike Huckabee and Ben Carson to get attention by being outrageous as well, to which Todd said it was “something that somebody at 1 or 2 percent thinks.”

“Look at some of the other candidates that haven’t just done that but have done more interviews,” Todd said. “You can make an argument Hillary Clinton has made herself more available this month, but she’s not trying to throw rhetorical bombs.