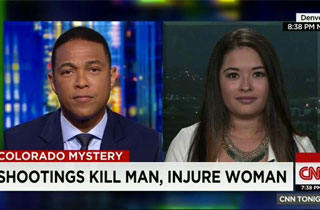 A Colorado news anchor managed to play Twitter ombudsman for CNN last night after they erroneously referred to a shooting suspect as a “serial killer” in a deleted tweet.

Earlier that day, CNN Tonight tweeted out an link to Ana Cabrera‘s coverage of a series of random highway shootings in Colorado, one leading to the death of a bicyclist on the side of a rural road. While police are treating this as the work of a potential sniper, CNN jumped five steps ahead and declared the man a “serial killer.” (It’s important to note that Cabrera’s report didn’t refer to the suspect as a serial killer.)

@WhelanMegan I don't know what's going on. But I know that positing that a serial killer is on the loose is irresponsible.

I have nothing against @cnn and @AnaCabrera is a fine anchor/reporter. But that crossed a line. Facts matter. https://t.co/zKbkqnEvWp

The only people linking John Jacoby's death to the I-25 windows at this point are speculating reporters. https://t.co/F1ga3mgHKC

If, God forbid, we ever have to warn Colorado about an actual serial killer, we'll need every ounce of credibility the media can retain.

Cabrera quickly notified CNN of their error, and the show soon issued a correction on their Twitter account, noting that they should have referred to the man as a “serial sniper”. Clark applauded Cabrera for quickly correcting the record.

That said, his earlier prediction is probably, sadly, true:

What have we learned?