CNN’s John King: Boston Reporting Errors Were ‘Embarrassing,’ A ‘Shot To My Credibility’ 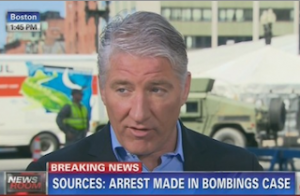 Reporter John King appears to be taking all of the criticism being hurled at CNN after a trying week covering the Boston Marathon bombings personally. King told Washington, D.C. radio station WTOP Tuesday that the whole situation is “embarrassing” and as a Boston native, it’s “a double kick in the head.”

King took some heat last week for prematurely reporting the arrest of a “dark-skinned male” in the investigation from MSNBC’s Al Sharpton and others. But also got some unexpected support from Fox News’ Bill O’Reilly and Bernie Goldberg. When faced with questions about the errors he had to “walk back” on the radio today, King said, “It’s not walking back, it’s correcting it. You have to do that, and it’s embarrassing.”

“I’ve been at this for nearly 30 years,” he continued. “I’ve covered a couple wars and a lot of breaking news and a lot of cops-and-robbers situations. I’ve got a pretty good track record, but when you do something like this it’s embarrassing.” He added, “beyond being personally embarrassing, it’s tough for your viewers, who you want to trust you. So the one thing you do have to do is look in the camera and say, ‘We were wrong,’ and try to explain why we were wrong.” He reaffirmed that in the case of the false information about a suspect’s arrest, he had two sources confirming the story, but it turned out they “simply had bad information.”

The incident last week was just the latest trial for King at CNN, after he was demoted from his anchor role last June when the network decided to cancel his daily show John King, USA.

Listen to audio below, via WTOP: