Coalition of the Willing. Game of Thrones Recap: Season 6, Episode 10: ‘The Winds of Winter’ 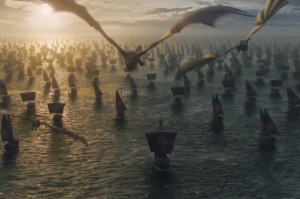 Major spoilers for Game of Thrones Season 6, Episode 10: “The Winds of Winter”

“Sometimes before we can usher in the new the old must be put to rest.”

Cercei did say she would burn cities to the ground to protect her children. Maybe cities should have listened.

Even by the standards of Game of Thrones — and of the Lannister clan, in particular — Cercei’s final coup is remarkable in its savagery. In one storm of wildfire, she dispatched the Sparrows, the Tyrells, and the unwashed hoards of Kings Landing, roasting her enemies and establishing her incontestable control over the city.

Meanwhile, Qyburn’s army of urchins make quick and dirty work of Grand Maester Pycelle, pecking him with a dozen blades in a dank cellar. And Septa Unella, the indomitable instrument of Cercei’s torture last season, will be subjected to the most unspeakable torment at the hands of the Mountain — again, just as Cercei promised. A Lannister always pays her debts.

The show can sometimes feel like an exploration into vast, uncharted realms of cruelty. And whether it was the intimate brutality of Lancel and Pycelle’s deaths and Unella’s torture or the apocalyptic detonation in which Cereci literally wipes out the home of Gods, Cercei’s last stand — which kicked off the season six closer “The Winds of Winter” — was an elegantly constructed sequence, building slowly and inexorably toward a series of demonstrations that no matter how bad you think it is, it will get worse.

Because after the wildfire roared, the myriad loud and violent deaths were punctuated by a quietly, heartbreaking one: Tommen Baratheon (the “Sad King”?) silently leaping off the balcony of the Red Keep. Of course, at this point, one has to wonder if even Tommen’s suicide wasn’t a cooly calculated piece of Cercei’s plan. What else was he going to do? The glacial manner in which she told Qyburn to toss her son’s ashes on the Sept-shaped hole she just left in the earth suggests as much. And with no heirs, no siblings, and not even the Tyrells left to take up the mantle, Tommen’s death leaves only the Queen Mother, who’s lost whatever’s left of her soul along with her three children, to take up the crown.

“The Winds of Winter” belonged to queens. Formidable as Cercei is, she now faces a coalition of factions that are, it should be noted, all led by women: the Sands in Dorne, the Greyjoys in exile from the Iron Islands, the Tyrells (which consist now only of the steely Lady Oleanna), and of course Daenerys Targaryen.

“Do you know what frightens me?” Dany asks Tyrion after unceremoniously ditching her paramour and protecter Daario. “I said farewell to a man who loves me. A man I thought I cared for. And I felt nothing.” Yeah, it should frighten you — and Tyrion. Cercei may have always been an ice queen, but watching the steady erosion of Dany’s empathy over the course of six seasons has been one of the quietly chilling trajectories of the story.

Her unshakeable self-righteousness has led her to make catastrophic blunders and perform outrageous cruelties (remember all those crucifixions?). And since leaving Vaes Dothrak, she has been possessed by a renewed sense of intention that seems to have come at the expense of her affection for the little people and patience for “doing things the right way.” She is a conqueror first and a ruler second; the ends justify the means, and so forth. And now she has the ships, the dragons, and the inside track with her new Hand of the Queen. Not only is he the smartest man in Westeros, he is perhaps the only one who knows exactly how to sack the capital city, since he almost died defending it himself. All this provides much fodder for the theory that Dany will emerge as the show’s ultimate villain, and leaves one to wonder where Tyrion will stand if and when the Mad King’s daughter goes off the deep end.

(I suppose no recap of this episode would be complete without a nod to the fact that Jon Snow was, yes, finally revealed to be the son of Lyanna Stark and Rhaegar Targaryen. It’s pretty thankless work for the show’s creators to deliver a revelation scene when the revelation was long guessed and endlessly explicated online for years. It was a bit like watching a magic trick when you know the trick.)

If the Southern and Essos plotlines propelled us into dangerous new territory, the machinations in the North were deliberately, even overbearingly, nostalgic. It wasn’t merely the northern lords coming together to proclaim yet another son of Winterfell the “King of the North.” I’m a bit sick of the tedious scheming of Littlefinger as he tries to drive a wedge between Sansa and Jon Snow. As a character, Littlefinger seems to be most effective in the limited realm of court intrigue (seasons 1-4, basically). That’s where he thrives. But place him anywhere near the incoming hoards of White Walkers or juxtapose him with the onslaught of dragons taking off from Meereen, and suddenly this conniving creep is exposed for the small-minded little worm that he is. “Knowledge is power,” he once told Cercei, a comforting platitude for a man who’s basically a gossip queen and chess grandmaster wrapped in a robe of ambition. But she pointedly corrected him: “Power is power.” Well, he’s smirking in a corner of a room where nobody notices, and she’s sitting on the Iron Throne.

Six years later, I think we can agree she was vindicated on that one. Littlefinger plays the game of thrones just to play it. Cercei plays to win. And so does Dany.