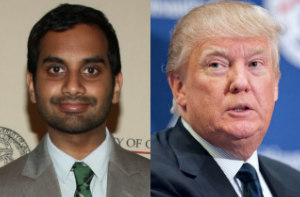 Donald Trump is right: He’s a “uniter.” But when I say that, I’m pretty sure it’s not in the way Trump intended it. What I mean is that Trump has somehow brought together Muslim Americans of all backgrounds – from those who barley identify as Muslim to those who are very devout – all with the common purpose of stopping Trump.

And now we can add comedian/actor Aziz Ansari to the list as another person Trump has inspired to counter his anti-Muslim hate. Ansari penned a powerful and moving op-ed for The New York Times on Friday titled, “Why Trump Makes Me Scared for My Family.”

Ansari opened his article by sharing the text message he sent to his Muslim parents about going to mosque to pray shortly after the Orlando attack, “DON’T go anywhere near a mosque. Do all your prayer at home. O.K.?”

Ansari continued by explaining that due to “Trump and others like him spewing hate speech, prejudice is reaching new levels. It’s visceral, and scary, and it affects how people live, work and pray.” He added movingly, “It makes me afraid for my family.”

What makes this op-ed even more significant is that Ansari, who has over ten million followers on Twitter and is the star of Netflix’s “Master of None,” barley has any personal connection to Islam beyond his parents. He noted as much as in his article, writing, “I myself am not a religious person.” (In fact a 2010 New York Times article noted Ansari was an atheist.)

But Trump has brought the Muslim out of Ansari. The presumptive GOP nominee’s rhetoric stoking the flames of hate against Muslims. From his proposed Muslim ban to saying “Islam hates us” to fabricating a story that “thousands” of Muslims cheered in New Jersey after 9/11, all caused Ansari to stand up for not just his parents but for Muslims across America as well.

And Ansari is not the only famous Muslim who has started speaking out more publicly about their connection to Islam and countering Trump’s hate. NBA legend Kareem Abdul Jabber has written numerous articles in last year calling out Trump’s anti-Muslim crap. And comedian Dave Chappelle, who is also Muslim, has increasingly mocked Trump on Twitter and in his comedy shows.

I first met Ansari at open mikes in New York City in the early 2000’s when we were both newer, struggling comedians. Our conversations generally centered on comedy and later me trying to get booked in the weekly stand up show he hosted at the Upright Citizens Brigade. (For the record, he never booked me and I’m still a bit bitter!)

If I saw Ansari now, I would thank him profusely for his article-despite not booking me in his show. His article is more important than many realize. A hugely popular celebrity not only defending Muslims but also publicly noting his connection to the faith makes Muslims more familiar to our fellow Americans.

Harvey Milk famously urged members of the LGBT community in the late 1970’s to come out of the closet to their fellow Americans. Why? Simple. Milk’s hope was that by people meeting and getting to know a gay person, it would “break down the myths. Destroy the lies and distortions.” Milk added poignantly, do this “for your sake. And for their sake.”

Muslim Americans need to follow Milk’s wise words and follow suit. And that especially goes for famous Muslims who barely talk about it. (I’m looking at you Dr. Oz and Shaquille O’Neil.)

But for now Ansari’s article – which has gone viral – is a great step for young Muslim Americans who are being bullied in school in record numbers and often feel alone. Seeing a celebrity popular with younger people defending Muslims and mentioning a connection to the faith can make a real difference. (Your turn Zayn Malik!)

Now I’m really hoping Trump has the guts to respond to Ansari’s article via Twitter. Nothing would be more fun than to watch an Ansari -Trump Twitter fight. I can assure you that Ansari would destroy Donald Trump.