Cokie Roberts: Mosque Will Probably Get Built And Cease To Be A Big Deal
video

Cokie Roberts: Mosque Will Probably Get Built And Cease To Be A Big Deal 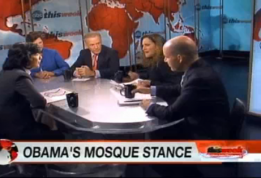 Interesting roundtable on the proposed Mosque in lower Manhattan today on This Week, one that demonstrated the wide array of opinions both on the building of the center and President Obama‘s various comments on it this weekend.

Cokie Roberts thinks that despite Obama’s follow-up remarks yesterday saying that he was not weighing in on the “wisdom” of the mosque, merely the group’s right to build it, his initial comments on Friday were “clearly and endorsement” and to “walk back is just silly.” She also noted something that few others have come out and said but which is likely quite accurate, namely that this mosque will probably get built and after that will cease to be a big deal: “My guess is, eventually it does get built and that it becomes no problem.”

Matthew Dowd, however, thinks that this marks yet another instance of Obama behaving like Bush and saying “it’s my way or the highway”

I think they figured out this is a real political problem they have. And I think they either had a tin ear at the beginning of this and how it was going to come across or they mishandled it totally from the beginning, because if they understood, I think, the public on this, where two-thirds of the public say they have a right but two-thirds of the public say don’t do it, he would have given a speech going directly to those points, instead of saying — one day saying they have the right and the next day saying I didn’t necessarily say it was the right thing to do.

I think this is a big problem for the president, because it feeds a broader narrative about him, which is, it’s my way or the highway. In many ways, to me, it reminds me of Bush, which is, is, “I don’t care where the American public is on this. I’m going to say what I think is the right thing to do.”

In the larger sense Dowd seemed concerned Obama wasn’t more sensitive to the current political winds, later saying he is speaking from a “position of weakness” because his approval numbers are so low.

WaPo’s David Ignatius meanwhile thinks Obama’s speech on Friday was “a model of political courage,” and furthermore wishes he hadn’t dialed it back yesterday:

As the world looks at us, if they see that the United States — even in — you know, an issue that hurts — and Ground Zero hurts — even on that issue, we still stand up for the freedom of people to dispose of their property as they want, that does count.

Watch the roundtable below.