Concha: Bring Back Newsweek to Print? Why Not Re-Open Blockbuster Stores While We’re At it
columnist

Concha: Bring Back Newsweek to Print? Why Not Re-Open Blockbuster Stores While We’re At it 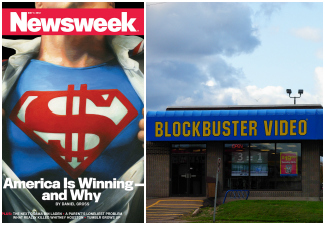 Let’s say I had a business.

And for awhile, millions of people were buying what I was selling every week. My product was practically an American institution, a staple in dentist offices from sea to shining sea for nearly 80 years. Good times!

But then, interest in said product began to decline drastically. The reasons were simple: Technology made my competition—much of it new competition—faster, cheaper, arguably more compelling to my consumers.

Now my original product is no more. In the end, I was throwing away money like an overserved bachelor party at an adult entertainment venue. My business model was more antiquated than, say, going to a store and renting a movie (yes millennials…this actually was once a popular thing to do). So I closed shop on my original business (Newsweek) and shifted all of my time, money and resources into my more relevant, modernized, cooler offering (The Daily Beast).

And then one day recently, I got this idea: I’m going to bring back my old product—yup, that same one nobody was really buying anymore—and I was going to (hope you’re sitting down) charge more money for it. Remember, this is the same publication that once had 3.3 million readers per edition in 1991, before losing 1.8 million of those readers by 2010. That same year, Newsweek’s owner, The Washington Post, sold the publication to billionaire Sidney Harman for (drumroll)… one… whole… dollar (or 100 cents). That’s apparently the going rate when your enterprise is losing a cool $40 million per year.

So it only makes complete and total sense to resurrect Newsweek’s print edition, right? It really would be like Blockbuster saying, “You know what? I know people can just press a button on their remote control and order a movie without leaving their chair, let alone their house or apartment, and not worry about long lines, stock storages or late fees. But what the hell! Let’s re-open Blockbuster stores and—because we think people are completely brain-dead–raise the cost for rentals in the process! Hopefully everyone still has their DVD players hooked up. Really…what can possibly go wrong???”

“It’s going to be a more subscription-based model, closer to what The Economist is compared to what Time magazine is,” Newsweek Editor-in-Chief Jim Impoco explains. “We see it as a premium product, a boutique product.” Well, when you put it that way…

So you’ll have to excuse me for all of the cynicism dripping from your screen right now.

If a business fails, you don’t bring it back to life simply by offering the same thing over again at a higher cost. More and more folks—particularly the younger key demo advertisers care about–get their news and perspective on screens for free, not magazine paper at a cost.

But to make it official, you can now add another 15 words to the following:

In this world nothing can be said to be certain, except death and taxes.

…And Newsweek failing again in spectacular fashion sometime in the next 8 to 12 months.