Concha: Loss of Super Bowl and Tourism Could Make AZ Bill Decision an Easy One

Concha: Loss of Super Bowl and Tourism Could Make AZ Bill Decision an Easy One 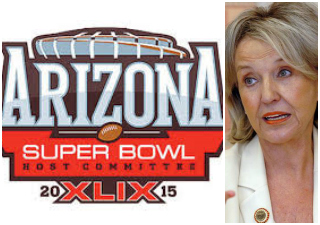 The last time Arizona hosted a Super Bowl—an epic upset with the Giants beating the undefeated Patriots—it generated north of $550 million for the state economy.

So if there’s any doubt as to how Arizona Gov. Jan Brewer will vote on a “religious freedom” bill that critics argue discriminates against gays, simply do what should always be done in these situations:

For those who wonder if the NFL would actually pull the 2015 Super Bowl out of the Copper State over this law, wonder no more…because it has already happened. The year was 1993, when the game was supposed to be held for the first time in the state (Sun Devil Stadium in Tempe). But a few years before the game (cities are awarded the game well in advance); the NFL began taking heat for the state’s refusal to accept Martin Luther King Jr. Day as a state holiday. After it appeared that stance would not change, then-Commissioner Paul Tagliabue made the call to move the game to the Rose Bowl in Pasadena (the infamous Leon Lett-fumble-to-prevent-the-Cowboys-from-putting-up-a-59-spot-on-the-Bills blowout).

Only after the state reversed course did the league allow the big game to be held within Arizona’s borders (1996). The reason for said reversal was the kind of classic 1-2 punch that prompts a change of heart: Loss of big-time money from both the Super Bowl itself…and more crucial to the state, tourism dollars.

Check out these numbers from the Arizona Sports and Tourism Authority:

So if the outgoing governor — who is term-limited — wants a major part of her legacy to include permanently damaging the primary lifeblood of the state, she can roll the dice and take her chances. A veto may anger some (certainly not all) religious conservatives in the state, but the noise would be faint compared to the calamitous cacophony coming from business owners when tourism takes a major hit. And if you’ve watched substantial media coverage on this topic, you can rest assured Brewer’s decision not to veto will have a permanent and devastating effect.

As written in this space before, the National Football League is one of the most powerful entities in the country right now. As mentioned earlier, next year’s game is scheduled for February 1st in Glendale, AZ (home of the Cardinals). The NFL stated Tuesday it is following the situation around the bill closely while releasing the following statement:

“Our policies emphasize tolerance and inclusiveness, and prohibit discrimination based on age, gender, race, religion, sexual orientation, or any other improper standard.”

Something else that is becoming more powerful by the day is the momentum behind the gay movement. Americans increasingly support it, as does almost all of the media. In the words of Seinfeld, “Not that’s there’s anything wrong with that…”

Pulling next year’s Super Bowl would be a serious blow to Arizona. Not just its politicians, but businesses both large and small.

And the domino effect on tourism from there?

Let’s just say a visit to the Grand Canyon might not be on too many bucket lists moving forward.