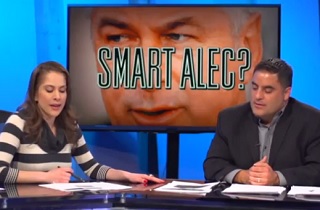 The contrarian parlor game of the week is to kinda-sorta agree with actor Alec Baldwin‘s “Good-bye, cruel world” rant in New York Magazine, a 5,000-plus-word screed that was as self-serving as it was self-contradicting. On popular web series The Young Turks, host Cenk Uygur, also a refugee from MSNBC, found a lot of wrong ways to agree with Baldwin, but also made a really excellent point about media reporting, and reporting in general.

Early in the segment, Cenk and co-host Ana Kasparian try to contextualize Baldwin’s use of anti-gay slurs, not to excuse them, but to make the case that Baldwin is maybe not a homophobe. They also acknowledge that if he had apologized in a more sincere and cognizant manner, Baldwin could have avoided some of this trouble. There’s also the legitimate point that Baldwin grew up in a time when “fag” was a completely permissible term, but this all misses the point of the legitimate anger at Alec Baldwin.

When Ana says that “faggot” was more of a “general” insult back in the day, she’s right, but they get it exactly backwards by interpreting that usage as not really being about gay people. It’s not that “fag” was so pervasive that no one realized it referred to gay people, it’s that the premise that being gay is undesirable was so pervasive that the use of the word was second nature.

This is important, because while Alec Baldwin is “awash in gay people,” and probably isn’t what you’d think of as a homophobe, his use of terms like queen, fag, or tranny reveals a vestigial hostility toward LGBT people, a second-nature contempt that, if he’s serious about being an ally, he needs to look at and quash. When you’re culturally trained into a bad habit, you have to be active in fighting it.

The next point of agreement between Cenk and Baldwin was about MSNBC President Phil Griffin, whom Baldwin says “couldn’t give a flying fuck about content,” a sentiment with which Cenk agrees. “He’s a million percent right,” Uygur says, and cites a recent interview in which Griffin apparently intimated that if there were enough money in it, he’d do conservative programming (news flash: he already does).

This is a bit of an unfair knock against Griffin, though, because wanting to make money and not caring about content are not the same thing. Griffin may not be an authentoc progressive (certainly not in the eyes of Cenk Uygur, who has been leaning forward since before MSNC had Michael Savage and Pat Buchanan on their air), but he’s also not a pure bean-counting mercenary. Phil is a deep believer in talent, and considers himself an excellent judge of it. If he were simply a profit-driven automaton, there is no way he would have stuck with All In long enough for that show to find its audience, when Chris Hayes’ show was being savaged by poor ratings and horrible press from media reporters. There’s a mercenary edge to Phil’s thinking, because Hayes’ old show killed with young viewers, so letting him grow into 8 pm was a smart, if risky, long-term strategy.

That’s a lesson that Griffin might have learned when he put Cenk Uygur, a strong, distinct talent, into an indistinct show at 6 pm. He made a similar mistake with Alec Baldwin by sticking a phenomenal talent into a show that was ill-suited to his strengths, and to the network. Baldwin’s rant, and Cenk’s agreement with it, are clearly by-products of the friction you often see between strong-willed talent and management. Should it surprise anyone that these two guys, whose creative clarity is essential to their success, would be difficult to manage, and would bristle under the thumb of a philistine? Baldwin makes himself look like an asshole for essentially getting Shia LaBeouf fired from a play, but if you had to choose between the two for an exercise involving acting, you’d be an asshole not to side with Baldwin. In that context, he’s worth it. As the host of a dull weekly chat show, he wasn’t.

Finally, Cenk agrees with Baldwin about this passage:

Once they fired me, a former MSNBC employee I knew emailed me. He said, “You watch now, Phil is going to start leaking left and right to bury you.” When I left, “Page Six” was flooded with lies about me. Another told me, regarding the “toxic little queen” comment, that Rachel Maddow was the prime mover in my firing, as she was aghast that I had been hired and viewed me as equivalent to Mel Gibson. Another source told me, “You know who’s going to get you fired, don’t you? Rachel. Phil will do whatever Rachel tells him to do.” I think Rachel Maddow is quite good at what she does. I also think she’s a phony who doesn’t have the same passion for the truth off-camera that she seems to have on the air.

Forget, for the moment, that Baldwin is decrying the use of anonymous leaks by employing a series of anonymous leaks, or that Baldwin had already pretty much buried himself. Cenk talks about how, when he was leaving MSNBC, someone went back several months to find weak Nielsen numbers to leak to the press. Obviously, he thinks Griffin was behind this, but the really excellent point he makes is that leakers are gonna leak. “What’s more deplorable are the journalists that play along,” Cenk says, adding that even if they know the leak is false or misleading, they say “Screw it, I’ll publish it anyway, because I got a leak!” (full segment here)

The subject of self-serving leaks in general is a too-rich topic, but the PR leak is a particularly weak subcategory. They happen all the time, and they range from fairly innocuous ratings spin to make a competitor look bad, to things like internal emails and the like in order to disparage an outgoing employee. There are responsible ways to handle PR leaks, like deciding if they’re newsworthy, and if so, properly contextualizing them. There’s the rub, though, because people who handle leaks professionally don’t get leaked to, and people who regurgitate them as is are “rewarded” with more. This is especially pervasive in media reporting, where the standard for newsworthiness is gymnast-flexible, and greased relationships with other media outlets are key.

For what it’s worth, in my years as a media reporter, I have received many PR leaks (many more than I have used), but I’ve never gotten one from MSNBC. If you ever see me quote a “source” at MSNBC, that is reporting that I developed, not that was fed to me. That’s not to say they don’t do it, but if my experience is at all indicative, they appear to do it less than others.

Cenk also takes a stab at defending Rachel Maddow from Baldwin’s attack, saying that “if she’s doing Machiavellian stuff behind the scenes, I don’t know it,” but there’s really more than that to refute Baldwin’s assertion that she got him fired, not the least of which is the fact that he was hired. If Rachel Maddow really wields such power at MSNBC, and took a dislike to Baldwin’s antics, then he never would have gotten a show in the first place. She probably wasn’t all that happy about it, but she also took no apparent steps to prevent it. In the time that I’ve spent at 30 Rock, Maddow-world is a pretty heads-down operation, so while her influence as the voice and face of the network is considerable, she doesn’t wield it like Grapthar’s Hammer. It’s more like a gravitational pull; everyone knows it’s there, and it doesn’t really have to do anything for you to feel it.