Concha: Time’s ‘Person of the Year’ a Good Choice, but Here’s a Better One

Concha: Time’s ‘Person of the Year’ a Good Choice, but Here’s a Better One 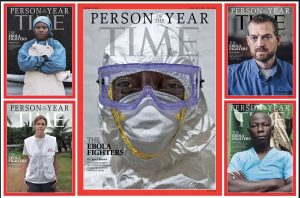 Time Inc. — like many of the old media guard — is struggling. Its latest earnings report was nothing short of disastrous after the publisher of 87 magazines informed Wall Street that most of its key business drivers/revenue producers such as subscriptions, newsstand copy sales, print advertising are all on the downswing, with its business outlook for Q4 looking weaker than expected.

One bright spot from a sales perspective for Time magazine itself is its “Person of the Year” issue, which usually outsells every other edition each year. To clarify the criteria, “Person of the Year” (formerly “Man of the Year” until 1999) is awarded each December to a person, group, idea or object that “for better or for worse…has done the most to influence the events of the year.” And as just announced on NBC’s Today Show, Time has selected The Ebola Fighters as its winner. Given what these people sacrifice–even their lives–in unthinkably-challenging conditions and the little reward each receives in terms of relative compensation, it’s hard to say the choice wasn’t a good one. If anything, it’s certainly the least controversial compared to the other choices on the list (more on that in a moment).

However…with all of that said, the award is not supposed to go to the most popular or likable or altruistic person or group on the planet. For instance, “Person of the Year” (in existence since 1927) has been awarded to everyone from Hitler to Stalin to Khrushchev to the Ayatollah Khomeini in 1979 after American hostages were taken. Why? Because those four men had influenced events more than anyone in those particular years, even if it was a negative impact in the eyes of almost all Americans.

But since ’79, Time is become timid. It’s choices more politically correct, more safe. For example, “The Good Samaritans” won in 2005 (Bono, Bill Gates, Melinda Gates). Wow…really? You couldn’t just be bold and pick one of them? If a U.S. president wins two terms, count of them winning twice (Reagan, Clinton, Bush 43, Obama all have two titles). Earth even once won in 1988 (climate change would undoubtedly cripple the world by the 21st Century if something wasn’t done about it then. Oh wait…).

But get this: The late Steve Jobs–who arguably had as big an impact on society as anyone in terms of what people use in their day-to-day lives–won the award in…ah, that’s right…Time just couldn’t seem to find even one year since 1984 to honor his achievements. Jeff Bezos–no slouch is his own right–did win in 1998, however (the year of the Lewinsky scandal dominated the news cycle…go figure). Mark Zuckerberg (Facebook) won in 2010–the same year the Tea Party came to prominence via a landslide midterm election (no matter…the Winklevoss twins get screwed again).

Back in 2001, Osama bin Laden was actually on the short list but was bested by then-NYC Mayor Rudy Giuliani. Like it or not, bin Laden was the right choice given Time‘s own definition around impact, but the backlash would have been too extreme for the Time Warner’s liking (who owned the magazine at the time).

Three years ago, “The Protestor” won for the game-changing impact the Occupy movement had on Wall Street and eeeevil capitalism in general. In a related story, the Dow and S&P 500 are at record highs. Bonuses will be going through the roof again this year at the major banks as a result. Yup…HUGE impact. And picking a group instead of a leader just feels too general and accommodating to a cause instead of the point person behind it.

Fast forward to 2014, where the Ferguson Protestors made the short list (and won the online voting portion) for Person of the Year for their exemplary behavior that played out on television screens across the country last month. At least a dozen buildings burned to the ground. Businesses–many owned by black owners–looted and destroyed. Remember, we’re not talking about the Eric Garner protestors who conducted themselves mostly peacefully and without any major incident, destruction or violence. Instead, Time specifically points to Ferguson–likely because it isn’t nimble enough to include anything that happened after December 1.

You know who should have won this year? Meet Malala Yousafzai, who only became the youngest winner of the Nobel Peace Prize in 2014. She’s no Taylor Swift, however (who was also on the short list), only having been shot in the head and neck two years ago after publicly defying a Taliban campaign to close schools to girls in an area it controlled in northwest Pakistan (Swat). And this wasn’t some random shooting, as the Taliban gunman specifically asked for her by name in the school bus she was riding in before firing three shots that put her in critical condition before finally recovering in a British hospital.

“We do not tolerate people like Malala speaking against us,” a Taliban spokesman said at the time, adding more assassins would come to finish Malala if she managed to survive. But she did and has since become an international symbol of courage and inspiration (and was a runner-up for POTY in 2012 but didn’t make the short list in 2014).

She now says she wants to become Prime Minister of Pakistan one day. Here’s hoping that comes true. Her story is one that is growing in at least one part of the world but deserves more attention here at home. Now still just 17, Malala is at the forefront of a battle between good and evil. A battle for education for all regardless of gender (scary that still needs to be written in the 21st century). The Nobel simply doesn’t resonate with most Americans, and the winners barely get reported here each year outside of a passing reference if an American wins one. Time needed to step up here and provide the larger podium. Know this: What you read above on Malala only skims the surface of what is one of the more remarkable biographies you’ll ever lay eyes on.

The Ebola Fighters are tremendous people saving lives in dangerous conditions , and as a husband of an ER doctor I can safely say nobody in their right mind would dispute that. But it’s called “Person” of the Year for a reason. Handing it to a group–regardless of how noble or courageous–dilutes the award a bit.

The humble opinion here is the better choice would have been Miss Yousafzai, who is making her huge impact on the world as a lone teenager.