Concha: Tony Not Dying Was the Only Sensible Sopranos ‘Ending’

Concha: Tony Not Dying Was the Only Sensible Sopranos ‘Ending’ 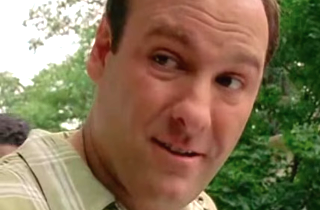 When you think of great endings for any program, any movie, the Top-5 list practically writes itself:

5. The Sixth Sense (and don’t tell me you knew Bruce Willis was already dead)
4. Breaking Bad
3. The Usual Suspects
2. The Shawshank Redemption
1. The Sopranos

The top spot on the list has always been a controversial one. The night was June 10, 2007, a Sunday evening when millions at home simultaneously thought their cable went out when David Chase‘s masterpiece of an HBO show suddenly went black just as Tony Soprano sees his daughter enter Holsten’s Diner for an informal family dinner. To this day, people still argue about how tremendous or terrible the ending was when the topic comes up.

So when David Chase finally, begrudingly revealed the answer (in an interview with Vox) to the now-seven-year-old question of whether the late, great James Gandolfini‘s iconic character lived or died at that last moment of the final episode (Made in America), it brought some relief to yours truly. The three words from Chase when pressed on Tony being dead: “No he isn’t.”

Chase’s rep, Leslee Dart, tried today to walk back the unambiguous answer: “To simply quote David as saying, ‘Tony Soprano is not dead,’ is inaccurate. There is a much larger context for that statement and as such, it is not true.”

Sorry. Ain’t buying it. Chase could have very easily presented that “larger context” to Vox writer Martha P. Nochimson and her eventual 5000-word piece on the topic. Just to provide an idea of how long a 5000-word article is, the column you’re currently reading is just north of 600 words.

At happy hours and dinner tables alike, my argument was that Tony couldn’t have died because it simply wasn’t consistent with the show’s constant underlying theme: Torture of the mind.

And that’s what some folks didn’t get: While the mob hits and overall violence were prevalent–even cartoonish in its execution (pun intended) at times (Phil Leotardo‘s death by bullet to the side of the head and closed casket insured by his SUV rolling over said head illustrated Chase’s dark humor at its finest)–they weren’t the backbone of the show. It was always about Tony (and most of the cast members) coming to grips with their own inner demons, their own laundry list of insecurities (good soldier and largely apathetic Silvio Dante notwithstanding).

Which brings us back to the final scene. Those who argue Tony died instantly by shot to the back of the head (by the infamous Members Only-jacket guy coming out of the bathroom) and the screen going pitch black illustrating the nothingness of death can’t be faulted for coming to that conclusion.

But it’s difficult not to keep going back to another Chase staple: plots without endings (the missing wounded Russian disappearing into Jersey’s pine barrens never being resolved serves as the biggest example). In Tony’s case at Holsten’s, remember what was going through his mind before the screen went dark. He’s constantly looking over the room, studying every face…all wondering who are friends, who are enemies, who could attack at any moment. This scenario is true even when amongst members of Tony’s crime family. Who is will sell him out to the feds as Big Pussy did? Who wants to take his place at the top by any means necessary?

This perpetual fear, mistrust, anxiety…this is the price Tony created for himself for living his life the way he had, the way he always will. He may have a loving family, he may have a big house, but he’ll never be at peace with himself. All of those sessions with Lorraine Bracco‘s Dr. Melfi couldn’t change that.

Almost every movie, every television program believes it is mandatory for endings to be tied with a perfect bow. Every plot resolved. Every character’s fate decided. But that’s not how life is. It’s never that neat.

David Chase finally spills the beans about what really happened to Tony Soprano that early summer night back in 2007.

And the genius and consistency of it all is revealed: