Congrats, Everyone: You Voted For NSA Overreach Under Obama And Bush; Now Can We All Finally End It? 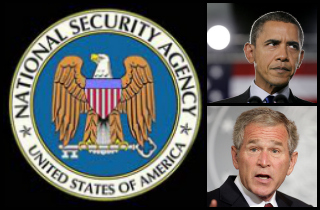 The news that the Obama administration’s National Security Agency is collecting the telephone records of millions of US Verizon customers via a top secret court order is astonishing and appalling on many levels. But there is one thing it is not: Surprising.

In the post-9/11 world, the US government has increasingly found ways to expand its surveillance capabilities through secretive court orders, malleable standards, and blanket laws — seemingly without restraint. This latest NSA news, as broken by the venerable Glenn Greenwald, only serves to confirm what civil libertarians have long suspected: the NSA has repeatedly engaged in massive surveillance of domestic communications of millions of Americans, regardless of whether they are suspected of a crime.

Libertarians who struggled through the Bush years will recall how the NSA had been secretly collecting the phone records of millions of Americans, with the help of telecommunications giants like AT&T, Verizon and BellSouth. “The NSA program reaches into homes and businesses across the nation by amassing information about the calls of ordinary Americans — most of whom aren’t suspected of any crime,” USA Today reported in 2006, several years after Bush initiated the secretive program.

Given Greenwald’s report, this all sounds eerily familiar. We now have confirmation that Obama has continued, if not expanded, that exact sort of egregious surveillance program. In fact, as Cato Institute’s Julian Sanchez told Greenwald, this Obama incident perhaps goes further with an “extraordinary repudiation of any pretence of constraint or particularized suspicion.”

This latest example of Obama overreach is sure to rankle the feathers of conservatives already rightfully disturbed by the DOJ’s extensive snooping on journalists and the IRS’s intentional targeting of tea party organizations. While many of these same conservatives were rah-rah’ing the expansion of the NSA and United States Foreign Intelligence Surveillance Court during the Bush years, it is a pleasant change to see them finally care about FISA. Welcome aboard.

Now it’s up to the liberals who lauded Obama as the “anti-Bush” civil liberties champion in 2008 to swallow their pride as well and take a stand against this administration’s overreach, despite what they might see as partisan opportunism coming from the right.

As the last 13 years have proven, regardless of who is in the White House the security state will continue to expand. And it will take some hypocrisy on both sides to finally end it.