Pundits Weigh In: From Now ‘Til 2016, Christie’s Weight Will Always Be A Target
column

Pundits Weigh In: From Now ‘Til 2016, Christie’s Weight Will Always Be A Target 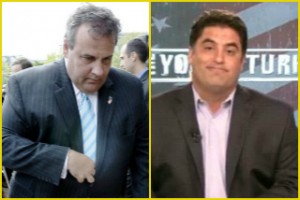 A noticeable trend lately from both the left and right is to include Chris Christie’s supple physical appearance in any critique of the immensely popular (in his own state) governor.

Exhibit A was on the display Tuesday night on Current TV, where Cenk Uygur declared to his audience of friends and family that the aforementioned Christie was holding a special election to replace the late Democratic Senator Frank Lautenberg was only an effort in “protecting his own fat ass!”

Coming from the not-so-terribly-thin Uygur, that’s what one would call hypocritical. He did, however, acknowledge his own problem with weight: “As a fat New Jersey American, I know I live in a glass house, and brother, I’m calling you out on it.”

This isn’t the first time—not even close—Christie’s weight has been part of political conversation. MSNBC’s Chris Matthews, who once provided the lead-in for Uygur’s equally-ratings-challenged 6:00 PM show before the YouTube legend was shown the door—also harps on the governor’s weight as much as his other fun favorite topic, GOP racism. Here’s one sample from the portly pundit:

“Chris Christie is moon over New Jersey, he should not wear white shirts, I tell you that… I saw him the other day and I was amazed by it, he must be 300 plus, and that’s something he’s just gotta deal with because you’re not going to say, ‘I’m going to cut the budget,’ well, how about starting with supper?”

Self-deprecation was never Matthews’ strong suit, so to hear something to the effect like, “Not that I couldn’t stand to drop a few pounds” to tag out of such a sentence is far too much to ask for.

And it’s not like this is limited to hard-left commentators, either. Conservative commentator Ann Coulter, who was for Christie before she was against him (and is for him again…must be summer flip-flop season), had this to say at this year’s CPAC conference…where Christie didn’t make the eVite:

“Even CPAC had to cut back on speakers this year by about 300 pounds.”

Is there even a need to comment further here?

But politics are becoming just as much about appearances as positions, right? Bill Clinton notwithstanding (and he obviously was nowhere near Christie’s number during his tenure) our Presidents tend to be physically fit and rarely are overweight in the modern era: Truman, Ike, Kennedy, Johnson, Nixon, Ford, Carter, Reagan, Bush 41, Bush 43, Obama…all guys who no one would ever describe as chunky. Not even close…

But when it comes to any female politicians who are overweight, that’s a topic no host or pundit would ever consider touching. A prime example is Maryland governor Barbara Mikulski (D), who appears to be somewhat overweight (not that there’s anything wrong with that…just making a point for the sake of this column). What would happen if she decided to run for higher office, or was in the news after making a decision to hold a special election. Would any cable news host or pundit dare call her a fat ass?

As you may have heard, the 52-year-old Christie underwent lap-band surgery recently and has reportedly lost over 50 pounds. Good for him. There’s still a long way to go before some voters’ concerns over his ability to be fit enough to hold our highest office are pacified if he decided to run in 2016.

But ask yourself this: Will Hillary Clinton—who will be 69 when ballots are cast that November, and has recently had several health scares to boot—be held to the same health exam and speculation as Christie by the national media?

Because in 2016, the only guy with a national stage to even be seen will be the governor…