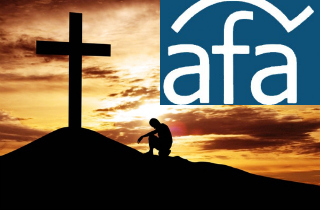 A leading Christian conservative organization, the American Family Association, emailed its members on Wednesday warning them that in less than 50 years, Christians will become “second class citizens” like blacks were under Jim Crow laws in the American South.

The letter, titled “What will religion look like in the year 2060?” warned the AFA’s members that despite Christians making up a strong majority of the American population, the followers of the religion will one day be subjected to discriminatory laws and a slew of offenses such as “the state taking charge of the children beginning at birth” and… a Muslim president.

Conservative Christians will be treated as second class citizens, much like African Americans were prior to civil rights legislation in the 1960s.

Family as we know it will be drastically changed with the state taking charge of the children beginning at birth.

Marriage will include two, three, four or any number of participants. Marriage will not be important, with individuals moving in and out of a “family” group at will.

Churchbuildings will be little used, with many sold to secular buyers and the money received going to the government.
Churches will not be allowed to discuss any political issues, even if it affects the church directly.

Tax credit given to churches and non-profit organizations will cease.

Christian broadcasting will be declared illegal based on the separation of church and state. The airwaves belong to the government, therefore they cannot be used for any religious purpose.

We will have, or have had, a Muslim president.

Cities with a name from the Bible such as St. Petersburg, Bethlehem, etc. will be forced to change their name due to separation of church and state.

Groups connected to any religious affiliation will be forced out of health care. Health centers get tax money from the state, making it a violation of church and state.

The AFA is also home to frequent Mediaite subject, Bryan Fischer, who has previously garnered controversy by saying God didn’t stop the Sandy Hook school massacre because we have removed prayer from schools, among other Christian-themed fiery remarks.